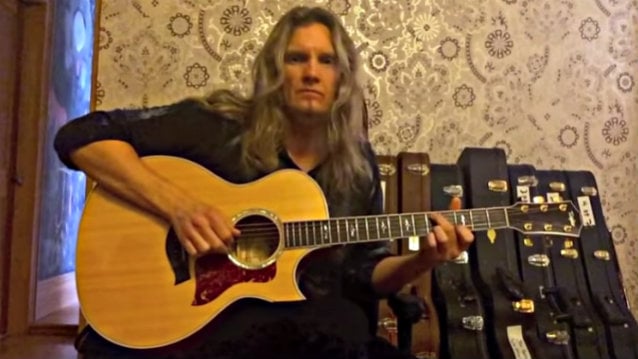 Says WHITESNAKE mainman David Coverdale: "One of the first, if not the first, guitarists to put his name forward after hearing that Doug Aldrich had left the band was an exceptionally talented musician whom we had met briefly last year when his band opened for WHITESNAKE in Arizona.

"Everyone was very impressed by him, not only for his ability to play amazing guitar, but, also his very agreeable personality and he was definitely foremost in our minds when we began to search for Doug's replacement in WHITESNAKE.

"We jammed together and were mutually impressed enough to ask him to join WHITESNAKE on the spot. This was May 30th. 2014.

"We sincerely thank you all for your patience and understanding… and so, without further ado, we ask you to welcome, as we have done, our exceptionally gifted new SNAKE brother... Joel Hoekstra... guitarist extraordinaire."

"We couldn't be happier for Joel," NIGHT RANGER said in a Facebook post announcing Hoekstra's departure from the band. "The last eight-plus years have been a blast, and we wish him nothing but the best."

Coverdale recently revealed that WHITESNAKE was "deep into the pre-production of the new WHITESNAKE project, which is so exciting to me, it's beyond words."

Dutch guitarist Adrian Vandenberg, who was a member of WHITESNAKE during the band's successful late 1980s period, recently told the classic rock program "Radio Fireball" about the possibility of rejoining WHITESNAKE: "Never say never. David and I will always do something in the future, whether it's with the two of us acoustically or whether it's a blues album or a rock album or a tour. We are too good friends not to do it and we have too much fun working together. But it has to be next to [Adrian's current project] VANDENBERG'S MOONKINGS, not instead of."