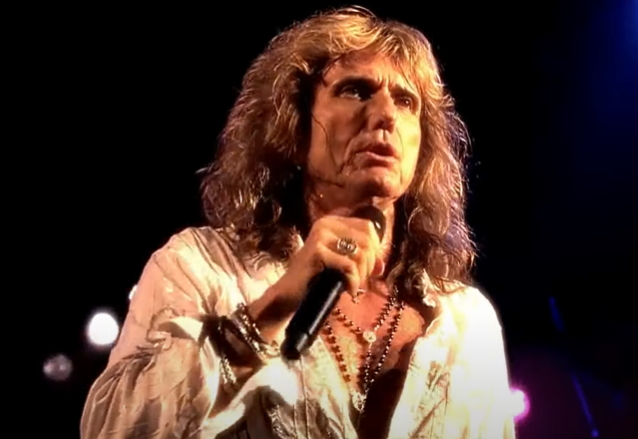 WHITESNAKE: 'Story Of Their Songs' To Premiere On REELZ This Weekend

The official synopsis for the episode reads as follows: "Spawned from the mind of former DEEP PURPLE frontman David Coverdale, the British rock band WHITESNAKE first appeared on the English music scene in 1978 and would soon achieve global stardom.

"'Story of Their Songs' celebrates six of their hits from the hard-hitting rock epics 'Love Ain't No Stranger' and 'Still Of The Night' to heartfelt groovy ballads 'Is This Love?' and 'The Deeper The Love' to the heavy blues of 'Fool For Your Loving'. It's a band with an everchanging lineup as they battled against the odds only to emerge with the chart-topping giant 'Here I Go Again'.

"Original members guitarist Bernie Marsden and bass player Neil Murray recall the group's early days and the drive that they saw in lead singer Coverdale who engaged in a relentless pursuit of perfection. Blues guitarist Joe Bonamassa offers his unique appraisal of what makes the WHITESNAKE sound so memorable while recording engineer Mike Fraser explains the sonic qualities of WHITESNAKE's multi-platinum breakthrough U.S. album '1987'. Emmy Award-winning music video director Marty Callner shares his experience directing WHITESNAKE videos and how model and actress Tawny Kitaen became a vital influence on their huge success. WHITESNAKE six-string legends Adrian Vandenberg and Steve Vai give the lowdown on their part in helping the band become one of the biggest rock acts on the planet."

Although Coverdale will no longer perform with WHITESNAKE, he is still planning on writing and recording fresh material once he has retired from the road. "I'll be still involved in music," he told Planet Rock. "We've got a relatively long-term deal with Warners. We have a poopload of projects to do under the WHITESNAKE banner. It's just the touring. It's not the performing so much that is exhausting, it's the touring, and I can't tour any more comfortably than I do. So I spoke to my agent and said, 'I wanna do this [farewell tour] more than anything. It's after 50 years of incredible support for me.' Not to be able to say thank you to the U.K., not to be able to say thank you to Germany, to Japan, Brazil, it would be heartbreaking.

In early 2020, WHITESNAKE was forced to cancel its U.S. tour with SAMMY HAGAR & THE CIRCLE and NIGHT RANGER so that Coverdale could undergo surgery for bilateral inguinal hernia. Eventually, all of the shows were canceled due to the coronavirus pandemic.