WHITESNAKE has announced the addition of Croatian singer/multi-instrumentalist Dino Jelusick to the group's ranks. Jelusick is a member of multi-platinum selling band TRANS-SIBERIAN ORCHESTRA and was previously part of DIRTY SHIRLEY (with George Lynch),ANIMAL DRIVE and recorded with many others. Dino has been singing, touring and recording since the age of five. Other than being a frontman, his main instrument are keyboards but he also plays bass, guitar and drums. He finished music academy and did theatre work.

WHITESNAKE's David Coverdale says: "I am absolutely delighted to welcome the extremely gifted Dino Jelusick to WHITESNAKE. We've had our eyes and ears on him since we played Zagreb together two years ago. You're going to love him!"

Dino says he has been influenced by WHITESNAKE and Coverdale from an early age.

"I am beyond honored to be part of one of my favourite bands of all time," he said. "To get the phone call from David Coverdale is something every singer and musician of my generation can only dream of; it still feels completely surreal. I cannot wait to start hitting the road with WHITESNAKE and, as the great DC said to me himself, to give a piece of my identity to the sound of this iconic band."

In other news, WHITESNAKE and FOREIGNER will hit the road across the U.K. and Ireland next spring alongside very special guests EUROPE. The trek will kick off in Dublin on May 10, 2022 before hitting Glasgow, Newcastle, London, Manchester, Nottingham and Birmingham, and closing in Cardiff. Tickets go on public sale this Friday, July 30 from 9 a.m. (U.K.).

Together WHITESNAKE and FOREIGNER boast a catalogue that spans the decades with seminal and anthemic hits such as "Here I Go Again", "Still Of The Night" and "Is This Love" (WHITESNAKE),"I Want To Know What Love Is", "Juke Box Hero" and "Cold As Ice" (FOREIGNER),to name a few. Very special guests EUROPE will bring their electrifying 'The Final Countdown" and more to this six-date U.K. arena tour.

Says Coverdale: "After all the extraordinary challenges we've been through together over the last year and a half, I am beyond excited to be able to announce our 2022 U.K. dates. I pray every day we can all make this happen and once again share unforgettable evenings together and celebrate the amazing journey we have been on for almost 50 years. Boys and girls… WHITESNAKE, FOREIGNER and EUROPE… It doesn't get any better! Let's make this night to remember… and let's make some [email protected]' noise!!!

FOREIGNER's Mick Jones says: "We can't wait to kick off the summer in the U.K. and Ireland with a massive tour alongside our friends WHITESNAKE and EUROPE. We're looking forward to playing all our biggest hits for our fans, and rocking across the country."

EUROPE's Joey Tempest says: "What an explosive start to the summer of 2022 for us! A U.K. and Ireland arena tour with our friends in WHITESNAKE and FOREIGNER! YEAH! An evening of some of the biggest anthems in classic rock! We are truly honored to be invited as special guests."

On October 29 2021, WHITESNAKE will release newly remastered and remixed CD and LP deluxe editions of "Restless Heart", along with unreleased demos and studio outtakes and a DVD. The DVD includes music videos and a behind-the-scenes look at the making of the album with new interviews from Coverdale. The set comes with a hardbound book filled with rare and unseen photos from the era. 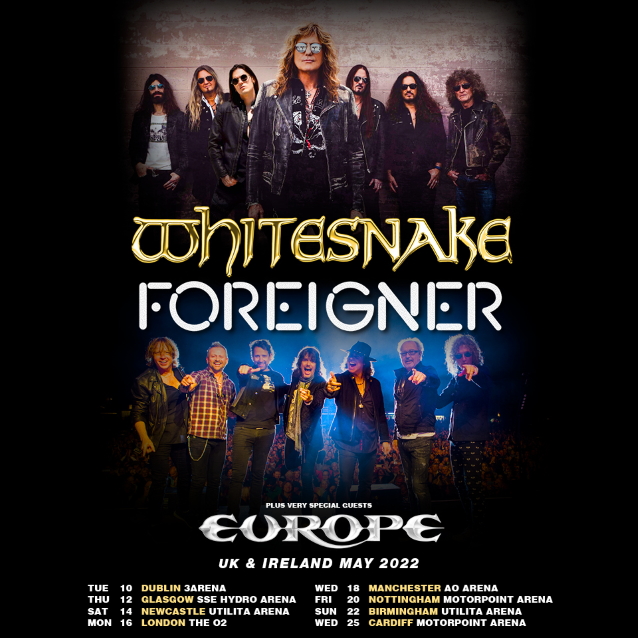