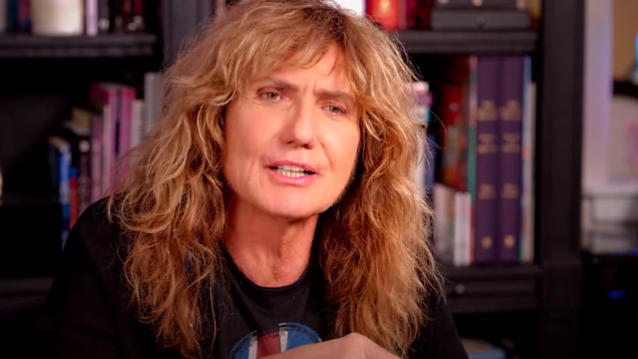 WHITESNAKE's DAVID COVERDALE Hasn't Gotten A COVID-19 Vaccine Yet: 'Let The People Who Really Need It' Get It First

WHITESNAKE frontman David Coverdale has told Meltdown of Detroit's WRIF radio station that he has been forced to delay his retirement tour due to the coronavirus pandemic which is sweeping the globe.

"People, as you can imagine, are extraordinarily desperate to go to shows and to perform shows," he said (hear audio below). "It's just not safe, and it's not gonna be the energy, the atmosphere that we're familiar with. We have to make sure [to] work as a global community, and, for me, as a global artist, work together and be, as they would say, in solidarity with each other and support each other and respect each other. It's a global pandemic — it's not just us. And mask up. Let's get out of this. Get vaccinated, and let's get out of this thing.

"I don't think it's ever gonna be the same," he continued. "I think society has changed. This has been a really challenging time for people who have been alone, I think. And that's a lot of my target audience with my social media — to try to uplift people's spirits, until I can get out there and truly do my appreciation and gratitude tour. And hopefully while I'm still physically able to do it and not just farting dust."

Asked if he has already gotten a COVID-19 vaccine, the 69-year-old British-born singer who currently resides in Reno, Nevada, said: "No. I'm not going anywhere. I go from my home directly to my studio. My co-producer is a cancer survivor, so his immune system's compromised. So right now, I've spoken to my doctors — I'm not going anywhere that I can potentially be exposed or expose anybody to [the virus]. So I'm taking my time. Let the people who really need it [get the vaccine first] — the front line of our defense."

Coverdale added: "Can you believe, man, that Amazon have been delivering — these amazing drivers, the mail people, UPS? Are you kidding? They've been delivering, without hesitation, this whole challenging year. I so salute those people. So there's been a semblance of normalcy for me, and I deal with isolation pretty good. They lock me up on tour, usually, and they let me out to go on stage, and then I'm back in lockdown. [Laughs]"

David is currently promoting "The Blues Album", the third and final release in WHITESNAKE's "Red, White And Blues" trilogy, a series of compilations organized by musical themes that began last year with "Love Songs" (red) and "The Rock Album" (white).

"The Blues Album" is available for pre-order now, and will be available on February 19 digitally and on CD and as a double-LP set pressed on 180-gram, blue vinyl. Like "The Rock Album" and "Love Songs", all the tracks on "The Blues Album" have been revisited, remixed, and remastered.

Coverdale, who will turn 70 this coming September, had both his knees replaced with titanium in 2017 after suffering from degenerative arthritis. He later explained that he was in so much pain with arthritis in his knees that it hampered his ability to perform live.