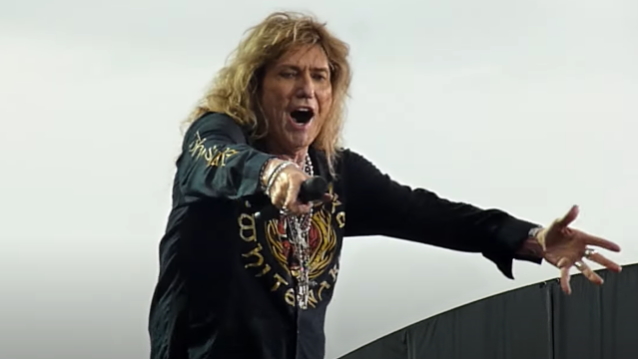 WHITESNAKE frontman David Coverdale says that he is still not completely recovered from the infection of the sinus and trachea which contributed to the cancelation of the remainder of the band's European tour.

Earlier today, the 70-year-old rocker took to his Twitter to write: "Still not 100% but, very happy to be home…Being sick in a hotel, on tour, just ain't the ticket…I hope You & Yours Are Well, Wherever You Are…Know You Are Appreciated & Loved…XXX".

On June 28, WHITESNAKE scrapped three shows on the tour due to Coverdale's illness. Three days later, the rest of the trek was also called off. At the time, David blamed the decision on "continuing health challenges, doctor's orders, and our concern for everyone's health and safety."

David was not the first member of WHITESNAKE to fall ill during the group's latest European tour. Guitarist Reb Beach missed several shows on the trek last month after being "under the weather." On June 25, WHITESNAKE canceled its show at the Rock Imperium festival in Spain due to the fact that drummer Tommy Aldridge "went down" and "was bad enough at the time to have missed the first show ever in his career," according to Coverdale.

Still not 100% but, very happy to be home…Being sick in a hotel, on tour, just ain’t the ticket…I hope You & Yours Are Well, Wherever You Are…Know You Are Appreciated & Loved…XXX pic.twitter.com/TLRU5FIzrR