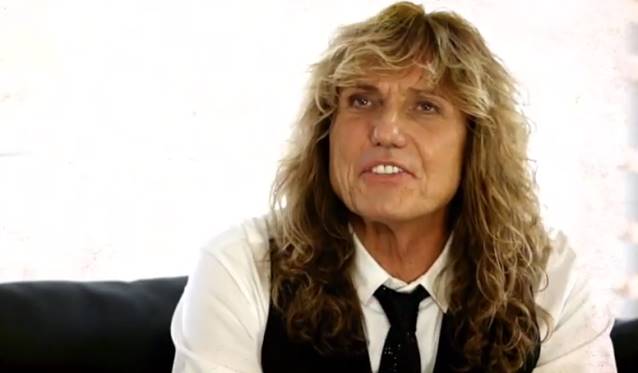 Former DEEP PURPLE and current WHITESNAKE singer David Coverdale was interviewed by Japanese music critic and radio personality Masa Ito in Japan at the beginning of WHITESNAKE's 2013 "Year Of The Snake" world tour. Part three of the chat can now be seen below.

Regarding WHITESNAKE's plans for a new studio album, Coverdale recently told Planet Mosh, "We've been asked [to make one], but we have quite an agenda for the next 2-3 years. It's a huge commitment for me at this time in my life, to be honest. To write and record a new album, I will set aside a full year to avoid stress or corporate deadlines. That said, if someone steps up to the plate, then I would willingly accept the challenge. I love [the last WHITESNAKE studio album] 'Forevermore'. I would truly love to go one further, as I think it's a cracking album."

In a separate interview with Rock Rebel Magazine, the singer spoke about his extensive use of Twitter in the last few months. "I'm embracing new technology to record my songs and it's a wonderful way to interact with people who love WHITESNAKE and help spread the gospel of the 'SNAKE and I'm having fun doing it. Very much. or I wouldn't do it," he explained. "A lot of journalists don't bother doing their homework and I'm finding out they don't ask the questions fans are most interested in, so now I can respond directly to people who actually enjoy my music."

Frontiers Records released WHITESNAKE's "Made In Britain/The World Record" in Europe on July 5 and in North America on July 9. The album was released in Japan on June 19 via Ward Records.