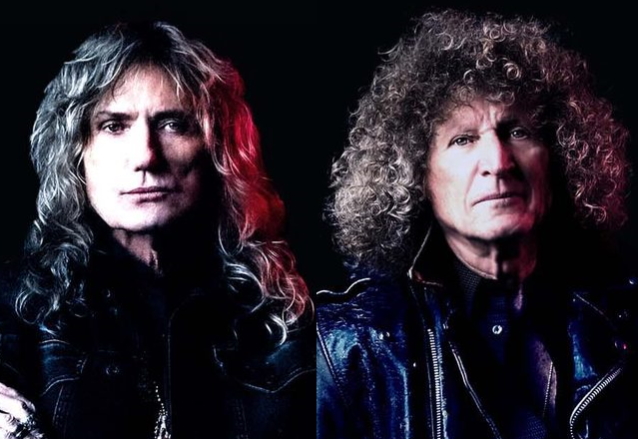 WHITESNAKE frontman David Coverdale has shot down as "misleading" the claim that Tommy Aldridge is suffering from "severe health problems", saying that the drummer was simply "under the weather" when the band was forced to cancel its appearance at a Spanish festival.

On Saturday (June 25), the organizers of the Rock Imperium festival in Cartagena, Spain released a statement saying that WHITESNAKE's booking agent had informed them "of the sad news that Tommy Aldridge is having severe health problems," causing the band to pull out of the event. They went on to wish Tommy "a quick recovery."

A short time later, the Twitter account @tadrums, which appears to be controlled by Aldridge, responded to the Rock Imperium statement, calling it "patently untrue". The same day, WHITESNAKE's official web site released a statement apologizing for the "unavoidable" cancelation of the Spanish show and blaming it on "unprecedented challenges" without making any mention of Aldridge's health.

Earlier today (Sunday, June 26), Coverdale took to his Twitter to issue the following clarification regarding Tommy's health: "Now Hear This!!! 'Tommy was under the weather, as we all can get, but is getting better: he never had, what was inaccurately described as 'severe health problems' and can't wait to get back out there to perform for the fans!'

Tommy is not the only member of WHITESNAKE to fall ill during the band's ongoing European tour. Earlier in the month, guitarist Reb Beach missed several shows after apparently contracting a mystery illness. After the Prague concert on June 14, fellow WHITESNAKE guitarist Joel Hoekstra addressed Reb's absence in a tweet, writing: "Reb Beach was under the weather and I had to cover his solos."

The 71-year-old Aldridge is on his third stint playing drums with WHITESNAKE. Before, during and in between his time with the David Coverdale-fronted outfit, Aldridge has also performed and recorded with OZZY OSBOURNE, BLACK OAK ARKANSAS, THIN LIZZY and Ted Nugent, among other artists.

Aldridge's latest studio release with WHITESNAKE was "Flesh & Blood", which came out in May 2019 via Frontiers Music Srl.

Now Hear This!!! “Tommy was under the weather, as we all can get, but is getting better: he never had, what was inaccurately described as “severe health problems” and can’t wait to get back out there to perform for the fans! “
The Spanish promoter released a misleading statement pic.twitter.com/pUF5PYrT9A

This is patently untrue. I don’t know how it ever saw the light of day.