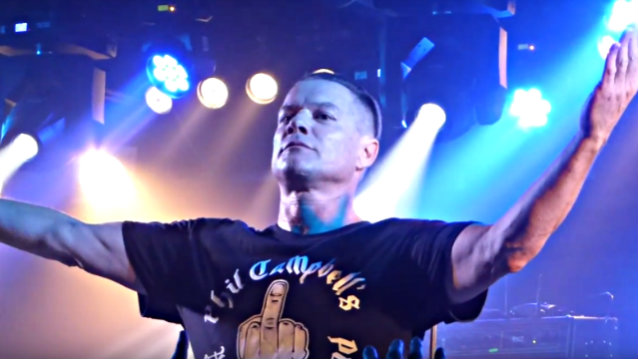 Cat Unrapped of the "Collision" radio show on Australia's Voice FM recently conducted an interview with UGLY KID JOE frontman Whitfield Crane. You can listen to the full chat below. A few excerpts follow (transcribed by BLABBERMOUTH.NET).

On the post-reunion status of UGLY KID JOE:

Whitfield: "It's pretty cool. We put the band back together and we released music in 2012. We weren't sure what would happen, like, would anyone still remember the band? Would people still go to the shows? We were a little scared, but very excited to go do it. Then we found out that people still remember the band and they do like the songs. So we've been touring for five years around the world and going to different places that we've never been to, all these crazy different places. It's good. We were all best friends years ago and then we stopped making music together. We remained friends, but we were missing that component which is music and touring. It's a special thing that's hard to put into words, but we've been doing that again. People have gone on and had families and been in different bands and different careers or whatever, but when you say 'How is it?' It's really cathartic and cool. It's nice to see everybody again. It's nice to be creative with these guys. In the land of UGLY KID JOE, all is well."

On whether their hit 1992 single "Everything About You" was written about one person in particular and whether Crane still thinks about that person every time he sings the song:

On performing live with MOTÖRHEAD throughout the years:

Whitfield: "I've performed with MOTÖRHEAD about twenty-five times around the world. You might be talking about on July 4, 2014, I was on the MOTÖRHEAD tour bus, just hanging out with them. I wasn't on tour, but I was on tour with them. About every third show, they'd say, 'Do you want to come and sing a song with us?' And I'd say, 'Oh yeah. Please.' And I'd always sing 'Killed By Death'. So we're at Hyde Park [in London] and the bill was, it was the best bill: It was SOULFLY played, then MOTÖRHEAD, then FAITH NO MORE, then SOUNDGARDEN, then BLACK SABBATH. [MOTÖRHEAD guitarist] Phil Campbell is, like, 'Is this the show you want to play?' I heard of these shows, but never seen them. It's massive. I said, 'Of course!' I was shaking 'I would love to sing with you at Hyde Park.' He asked Lemmy [Kilmister] and he said, 'Of course.' That was one of the many times I performed with them, but to me, what an honor. Lemmy up there going 'Whitfield Crane!' and handing me a microphone and I'm going, 'No way!'"

UGLY KID JOE's latest full-length album, "Uglier Than They Used Ta Be", was released in North America on October 16, 2015 via Metalville/UKJ Records.