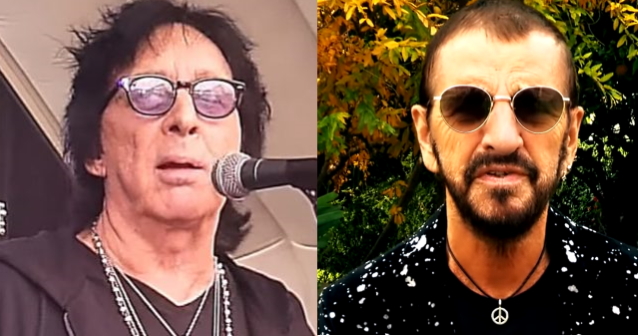 Who Is A More Underrated Drummer: PETER CRISS Or RINGO STARR?

Asked for an opinion on who the more underrated drummer is, Peter Criss (KISS) or Ringo Starr (THE BEATLES),Portnoy said: "Underrated, you'd have to say Peter, because Ringo, as much as people give him shit for not being a great technical drummer, which I don't believe in, by the way — I totally don't agree with that — but Ringo is still at least acknowledged as Ringo, one of the most influential drummers of all time, whereas I don't think Peter gets that credit. I know I always cite him [as an influence], Charlie will cite him, Roy, Brian Tichy — there's a lot of us that love Peter and grew up on him and give him that credit, but I think generally, he's very, very underrated."

Benante concurred, saying: "If you listen to the solo on 'Alive', '100,000 Years', it's amazing. I think the problem with Peter is that after 'Alive' and 'Rock And Roll Over', I felt like he didn't push himself anymore; he just played whatever was good for the song, and that was it. But he definitely had the best snare drum tones on certain songs."

Portnoy continued: "I think they were still hungry for [the early albums]. Then once 'Destroyer', 'Rock And Roll Over' and 'Love Gun' [were released], they became one of the biggest bands in the world, and it probably was less inspiring and less hungry. But another thing about Peter you can't forget about is his vocals. The first album especially, he's singing a lot of lead vocals…

"[There's] this amazing bootleg of [KISS] from Long Island, playing a club in Amityville in, like, 1973, and Peter is singing on a lot of that stuff — even stuff that Paul [Stanley] or Gene [Simmons] ended up singing on the album, but Peter was one of the lead singers back in those early days."