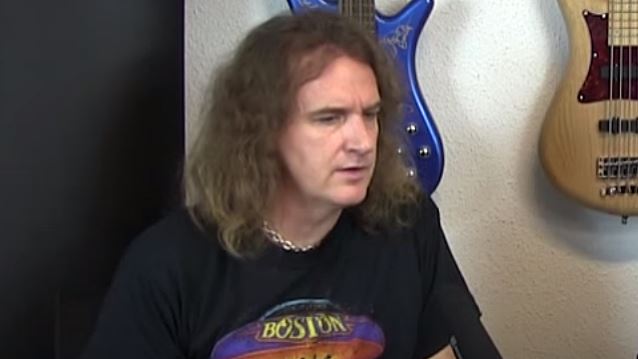 Who Is The Greatest Heavy Metal Bassist? MEGADETH's DAVID ELLEFSON Weighs In

Poland's Top Guitar conducted an interview with MEGADETH bassist David Ellefson at the fourth annual Warwick Bass Camp, which took place from August 31 to September 4 in Markneukirchen, Germany. You can now watch all three parts of the chat below. A couple of excerpts follow (transcribed by BLABBERMOUTH.NET)

On the most important thing when you want to play heavy metal on bass:

"Well, there's two sides of it. Probably the most difficult part is to get a sound in a band, because guitars are really big, they're really loud; drums now have gotten very big and powerful, starting probably with some of the early IRON MAIDEN records and then certainly once we got into Vinnie Paul and a lot of that PANTERA production. Man, the drums just got huge, you know. And so getting a sound that works is a big part of it; it's as much a part of it as it is the notes you play, because metal, you're really creating a big sound. It isn't just, 'Here's the notes,' or, 'Here's the melody,' it's really a unique thing. And it's funny, because a lot of these jazz guys that are here at the camp… I'll be sitting down riffing through something. I ended up using a pick for most of my career, just because it helps me get that sound, and it's really a part of it. People come by and go, 'Man, dude, no one does that.' And I realized that that's kind of what I've grown up doing and I've developed my own thing. That's why I always like it when I see Kyle Sanders, for instance, from HELLYEAH playing with great finger playing and great tone. And he knows all the old KISS songs that we all know, yet he does his thing, which is very new, and he's got a fresh outlook on it. And the guys in MESHUGGAH, all these guys really get these really big, cool bass sounds. They have a real presence in the band. To me, I think that's a part of it — to really have a presence in the mix."

On what he still wants to accomplish in music:

"It's funny, I just kind of live day by day. An e-mail shows up, the phone rings, a things happens, and I just kind of really try to live in the moment. It's funny, I wrote that autobiography, 'My Life With Deth', and one of my tentative titles was gonna be 'All The Best Things That Happened To Me Were None Of My Ideas'. Because that's kind of how it works, especially in the creative domain like we live. A guy says, 'Hey, dude, come over here and play a part.' And, 'Hey, can you come over here?' and next thing you're on a tour, next thing you're in a studio. And I think that's… To stay out of your head and stay out of your ego and stay out of… you know, 'Is this gonna further my career?' Or, 'How am I gonna look?' I see a lot of people get caught up in that, and I've done it myself over the years; it's kind of human nature to do that. But I think staying out of here [points to head] and staying down here [points to chest] is the real answer."

On who the greatest bassist in heavy metal is:

"It's hard to say there's a greatest, the best… those kinds of things. I would say… Look, Steve Harris [IRON MAIDEN], to me, really changed the presence of bass in metal music. He was the guy that came… And, again, a lot of this is just, at my age, when I was very impressionable, this group IRON MAIDEN came out, and next thing you know, the songwriter and the guy upfront with his foot on the monitors, who was almost like the lead singer of the band, was the bass player. [And I thought], 'Wow! This is awesome.' And I'd been listening to RUSH, and Geddy [Lee], of course, had a huge impact on me. Of course, Gene Simmons [KISS] before that. And Gene's a great bass player, man. He writes cool stuff, his bass lines are awesome and he breathes fire and spits blood while he does it. [Laughs] And, of course, Geezer Butler [BLACK SABBATH] and Bob Daisley, who played on those Ozzy [Osbourne] records and wrote a lot of that stuff. I like songwriter bass players; it's kind of a trend I've noticed. You know, Phil Lynott, Sting, Paul McCartney… on the more mainstream side of it. You know, there's something about guys that write that are… There's something different about how they weave themselves into the songs."