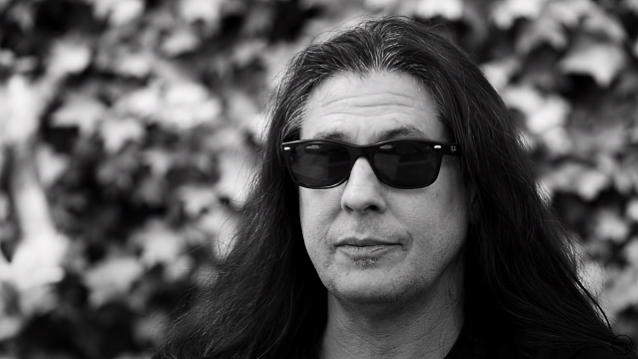 Why Did It Take MIKE MANGINI Nearly A Decade To Get A Lyrical Songwriting Credit In DREAM THEATER? He Explains

Mike Mangini discussed his relative lack of songwriting contributions to DREAM THEATER during a 2019 interview with Drumtalk, the video podcast by German drummer and videographer Philipp Koch, which has just been uploaded to YouTube. Asked why it has taken nearly a decade for him to make his DREAM THEATER songwriting debut as a lyricist on the track "Room 137" from the band's 2019 album "Distance Over Time", Mangini said: "Look, how about this? I was brought up not to go into someone's house and open the refrigerator. I also, as a drummer, have been asked to be in bands that were not just established but people in those bands worked very hard to create what I came into. So I have to have perspective and not forget that. So, yeah, it took time to be as involved as I was with this [album], but I also don't wanna make it about me, because anyone in the band could say the same thing as far as their contributions; it was equal. I could talk all day about what I, I, I, me, me, I did, but everyone could do that. And so I just wanna put the light on everybody that everyone did that. It took a long time to… I don't know. It's not for me to answer, because it is what it is."

Mike also spoke in more general terms about the role of a drummer in the songwriting process, particularly as it relates to sharing credit with other members of the band.

"We have to define what songwriting is," he said. "What does it mean when someone says, 'I wrote that song too.' What does that even mean? For a drummer, what do you mean? That you wrote a riff and you brought it to the band? Okay, then you wrote a piece of music. But drummers can contribute in other ways. For example, melody — that's the only copyrightable thing, right? The melody and the lyric. The point is melody doesn't exist without rhythm. So drummers can provide beats. Let me give you an example. Years ago, when I joined EXTREME, I was tooling around with this double hi-hat exercise where one would open while the other one closed and the other was open while the other one was closed. And I'd never heard of that before. It could only be done with my setup, so I never saw anything like it. I thought it was the coolest thing ever. I was stepping on pedals… [hums beat] And Nuno [Bettencourt] just, 'Give me the guitar,' yells to his tech, and got some kind of phaser or flanger or whatever the heck he stepped on, and he wrote the song, the riff to 'Leave Me Alone'. And then Gary [Cherone, vocals] went and got his little thin black briefcase and opened it and, like, 'Here, I have a song.' He starts singing it, and it was done — it was so fast how it happened. So I was part of that songwriting process — I was a credited songwriter, because the music notes went on to the rhythm I created. Plus the tones on the drums affected the pitches that Nuno used, the actual thing. So I was given credit for that. Fast forward to DREAM THEATER's self-titled [album], I did things like this on the drums. But who's writing the actual song and the notes? It depends. That's the main songwriter — that's their instrument. A drummer can't just be that, just like, 'Blah blah blah blah blah.' You know what I mean? I haven't been able to. Maybe people can; I don't know how. I needed to write music to say, 'Okay, I wrote music. Here.' So when I look back at the self-titled and I'm credited for songwriting on [some] of the songs, and I said, 'What did I actually do for that?' Take a [John] Petrucci riff — who's gonna write that except for him? So it's, like, he's writing that. Unless somebody writes it on an instrument, they did not write that. That's why I look back and I'm, like, I did not write that beginning to 'Enemy Inside' or something, but maybe I contributed some feel or something on the drums with the pitches that affected the way the other guys played notes."

Mangini joined DREAM THEATER in late 2010 through a widely publicized audition following the departure of Mike Portnoy, who co-founded DREAM THEATER more than 30 years ago. Mangini beat out six other of the world's top drummers — Marco Minnemann, Virgil Donati, Aquiles Priester, Thomas Lang, Peter Wildoer and Derek Roddy — for the gig, a three-day process that was filmed for a documentary-style reality show called "The Spirit Carries On".

DREAM THEATER spent most of the last year and a half touring in support of its 14th studio album, the aforementioned "Distance Over Time", which was released in February 2019.