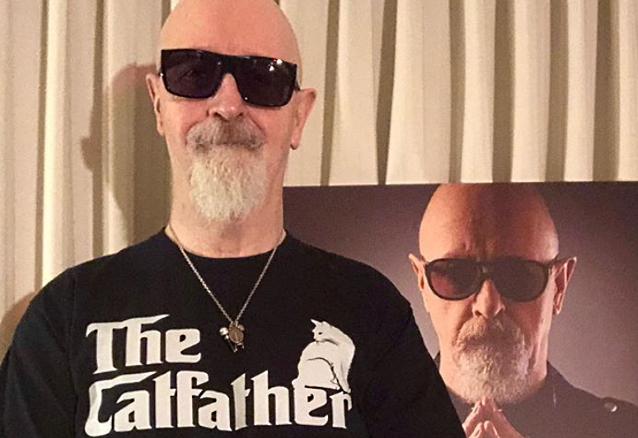 Why Do So Many Heavy Metal Fans Love Cats? ROB HALFORD Weighs In

In a new interview with the "Cobras & Fire" podcast, JUDAS PRIEST singer Rob Halford explained why he posts so many pictures on his Instagram of him wearing cat-related t-shirts. He said (hear audio below): "I think I have about a hundred cat t-shirts now. I used to have a beautiful kitty cat called Ben, who lived a long life and then suddenly passed, like they all do. It's like losing a family member. But it was kind of difficult, because I'm on the road all the time and there's nobody here at the house.

"As much as it's great sometimes for the cats to go into kitty jail [laughs], kitty vacation, my cat never liked that very much," he explained. "So I'm kind of making up for that with my cat t-shirts every Saturday on my Instagram, which is a lot of fun. I don't know how long that's gonna go on for. I think I'll run out of cat shirts [at some point]."

Asked if he has a theory as to why "a lot of heavy metal guys" really like cats, Rob said: "Ooh, yeah. That's very true. I only really started to figure that out [when] I saw things about books of photographs of metal musicians, particularly, with their cats. You get all these really strong guys and they've got their cats. Obviously, it's the power of pets, isn't it? Pet power. But it's great.

"There's a fun thread on Reddit about guys that hate cats, and then somebody brings a cat into the house, and the cat sits on the guy's lap and the guys instantly melts.

"They're beautiful creatures," Halford said. "I think the reason why we like 'em in our metal community is because they're fiercely independent. You think you know your cat, [but] the cat knows you better than you do. And they're so full of character and knocking things off the shelf and looking at you as if to say, 'Look what I can do.' But I love 'em for that. They're beautiful creatures," he repeated.

Halford's autobiography, "Confess", was released on September 29 via Hachette Books. The book has already been described by the U.K.'s The Telegraph as "one of the most candid and surprising memoirs of the year."