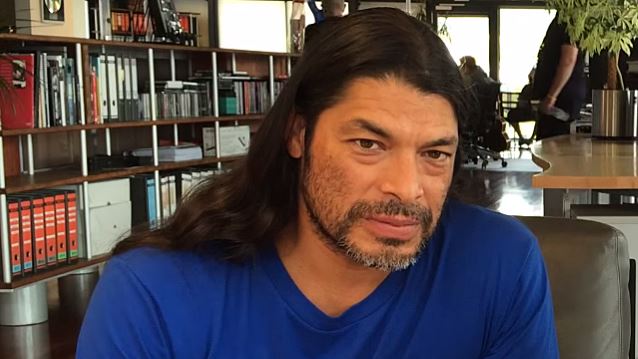 Why Is It Taking METALLICA So Long To Write And Record New Music? ROBERT TRUJILLO Explains

METALLICA bassist Robert Trujillo was recently interviewed by host Mitch Joel of the "Groove - The No Treble Podcast". You can now listen to the chat using the SoundCloud widget below. A few excerpts follow (transcribed by BLABBERMOUTH.NET).

On the progress of the songwriting sessions for the follow-up to METALLICA's 2008 album, "Death Magnetic":

"I'm having a great time, and we're having a really great time. And it's actually fun.

"We've been jamming on lots of new ideas — frameworks, so to speak. And, you know, James [Hetfield, vocals/guitar] is getting into working up melodies and experimenting on that level. But it's really, like, kind of, you work out parts, a process of elimination, and then you jam 'em out. We jam' em out and get 'em into your system, make 'em a part of you.

"That was one of the cool things that [producer] Rick Rubin had conveyed back when we were putting together songs for the last album. It was, like, 'imagine yourself playing these new songs and you have to prove yourself to these fans in this small little bar or club who you've never seen in your life.' And so he was, like, 'Stand up. Everybody stand up.' We could be in the studio, right?! But it's, like, 'Stand up and perform these songs. Make 'em a part of you,' basically. And it was that kind of motivational speech that really made sense, you know?! At the end of the day, it made sense. 'Cause it's just too easy to sit there and go over your parts. So when I was tracking bass, I was actually standing up and rocking. [Laughs]

"At the end of the day, whether it's riffs, or just arrangement, lyrics… the whole experience of writing a song, especially with METALLICA, it's involved, it takes time, it's a process. When I played in the INFECTIOUS GROOVES, it was a bit different, because we would actually go in and we [would spend], say, four hours a day, five days a week [working on ideas], and we would come out with two to three jams, song formats — blueprints, I should say — and we'd put 'em on a cassette tape. And then the next time we'd get together, we'd be in a studio recording the album. And Mike Muir, the singer back then, would have taken those cassettes and worked up the lyrics and the melodies, and, 'See you in the studio.' Next thing you know, we're playing 'em. And the drums would usually happen in the second take. We always wanted to catch the magic of the first take, or the second take. Now that's very different than what happens with METALLICA. But every situation is different. There's different magic that you wanna capture."

"For us right now, we're basically in a kind of scenario where we're nurturing the arrangements. And everything, really, is nurtured. It's like the transitions… trying everything you can try. That's just how it is. And I think that's what makes METALLICA's music great and special. Because it's that kind of pride, and, really, you're working on art piece. And it's gotta be right. And what does that mean? That means exploring. James always has a handful of words for one possible word. Maybe this word doesn't work out. Let's try these. It's a lot of work, and it's time-consuming, but at the same time, it's important, and it needs to be done that way, because the end result is what we hear from METALLICA, what everybody loves. If it wasn't that way, it wouldn't be METALLICA. In the same way that if… I was using INFECTIOUS GROOVES as an example. You know, that's how INFECTIOUS GROOVES should make records. It should be this spontaneous energy and capturing that magic on the second take or whatever. But with METALLICA, it's a different style and way to achieve a very special goal."

On the drive to make new music and be involved in other creative outlets:

"I feel fortunate because one of the things that is relly special about playing in METALLICA is that, actually, the members of METALLICA enjoy being creative, enjoy challenge and all the things that most bands, as they get a little bit older and a little bit deeper in their career, they get a little bit lax in terms of wanting to write songs. I mean, you'd be surprised how many known bands actually start writing with outside writers and stuff like that, and aren't actually writing their songs anymore. With us, it's kind of the opposite. We've got so many song ideas and riffs and bass lines and whatever — just an abundance of ideas, musically, from years and years of jamming — that the hardest thing is trying to eliminate. It's like a process of elimination when we write. So it's just great to be with an inspired group of kind of old guys, you know. [Laughs]"

On what he means when he says that the members of METALLICA still enjoy being creative:

"As a band, when I say that, I think about the film 'Through The Never', the 3D movie we made… I guess it would have came out [in 2013]. But that's… in a lot of ways, it's a creative adventure. I mean, we oversaw the narrative, for the most part, and the stage production and a lot of that. And it took a couple of years out of our lives, and those were a couple of years that we really needed to be writing, you know. I mean, a lot of the fans have been waiting for a new album. Now it's been, I think… it must be about five years or something. I can't even remember. Put it this way: in the time that we made 'Death Magnetic', as far as creating and writing the songs to the time that we finished touring it, there were five children born amongst us. It's kind of crazy and wild and funny. But I think the thing that kind of throws us off is we get caught up, again, in our own creativity. So whether it's recording an album with Lou Reed or creating a 3D film… those are creative projects, those are challenges, those are things that, I guess, we're not necessarily supposed to be doing. In the world of rock and roll, it's like… Working with Lou Reed, for us, was a really special moment. He was an icon. And especially for, I think, Lars [Ulrich, drums] and James, it was really going outside the box for them. Being in that creative bubble that METALLICA has, and as writers, stepping outside that to work with an alternative icon — really, a rock and roll icon, I wanna say — and being maybe, possibly humbled by the fact that, you know, we're not the bosses, they're not the bosses. There's another guy who's gonna be the boss, and we're gonna work with this man. So I'd say our derailment, or our sort of getting thrown off the path, was definitely based on creative challenges. Or tour… trying different things, like the 'request' show, or playing 'Ride The Lightning' in its entirety, or the 'Black Album', celebrating that. The Fillmore… We did the 30-year anniversary, four shows at The Fillmore in San Francisco where we played songs that METALLICA had recorded centered around other artists, like DIAMOND HEAD, or DANZIG, or BLACK SABBATH, and we actually invited some of those members, or all of those members, to come up and play those same songs with us. Now, who does that? I mean, we're not making money; we're losing money. We're doing it because METALLICA loves to take on the challenge, and those are challenges that would usually scare people. So we take the hit. A lot of people don't know that. [They think], 'METALLICA. Oh, rich rock stars.' But those things cost money. We take a hit and we lose… Even our festival, Orion, we didn't make money off that — we lost money. Bu, hey, at the end of the day, it's fun, and we can only try."

On Black Friday "Record Store Day," November 28, 2014, METALLICA released a limited-edition 12-inch vinyl of "Lords Of Summer". Side A features the "First Pass" (studio) version of the new song "Lords Of Summer" as well as a previously unreleased live version recorded at the Rock In Rome Sonisphere festival on July 1, 2014. Side B features a laser etching of the METALLICA "M" logo. This collectable vinyl is only available through independent retail and Metallica.com.

METALLICA last year completed a tour where the band played a nearly all-request set, with 17 songs chosen online by fans prior to each gig and the last slot filled by "Lords Of Summer".