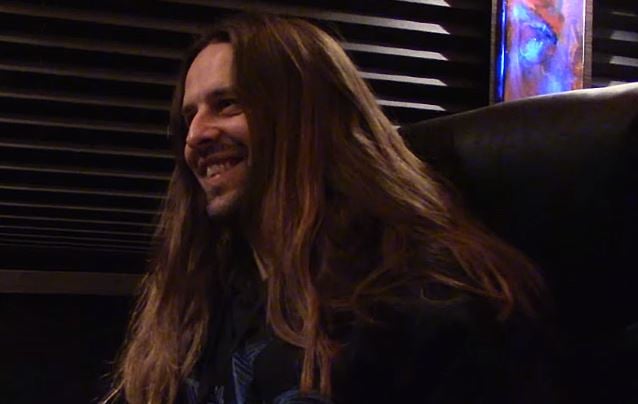 Musik Universe recently conducted an interview with KAMELOT keyboardist Oliver Palotai. You can now watch the chat below. A couple of excerpts follow (transcribed by BLABBERMOUTH.NET).

On why KAMELOT chose Swedish singer Tommy Karevik to replace Roy Khan instead of Italy's Fabio Lione, who toured with the band from 2010 until 2012:

Oliver: "Fabio is a fantastic singer. He especially has an incredible stamina. He is drinking, smoking, partying, not sleeping much, and he's so stable every night — unlike any other singer I've ever experienced. I don't know… In the end, Tommy hit the KAMELOT thing maybe a bit better. Fabio would have been a great choice as well, but Tommy is kind of… He is that KAMELOT feeling, and so he was our choice."

On writing, recording and rehearsing with a band whose musicians are spread out in the U.S. and Europe:

Oliver: "Well, it has also advantages, because when you live in Europe and America and you tour Europe and America, and you have different home bases, simple things like storage places… The costs are basically the same. We [the European members of the band] have to fly to America, but the Americans have to come to us, so it's balancing itself out. And songwriting and meeting in times of Internet is not a big deal. [As for rehearsing], we don't rehearse that much. Honestly, for some tours, we meet for the soundcheck for the first show; there's not much rehearsing. Everybody has to prepare well. We're all seasoned musicians — veterans, so to say. But sometimes before… When we have a new album out, usually we have, like, two days where we rehearse a bit."

KAMELOT's new album, "Haven", sold around 7,600 copies in the United States in its first week of release.

The CD was made available on May 5 in North America and May 8 in the rest of the world (excluding Asia) via Napalm Records as part of an exclusive licensing deal through the band's Kamelot Music LLC.