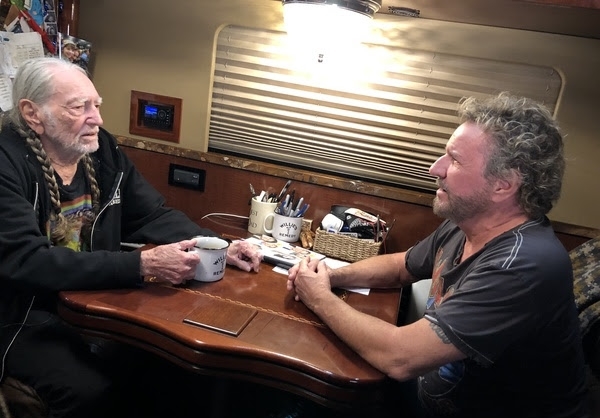 AXS TV has announced the return of the popular music interview series "Rock & Roll Road Trip With Sammy Hagar", premiering Sunday, May 5 at 8 p.m. ET. Hosted by beloved rock showman Sammy Hagar, the upcoming series puts the spotlight on 12 all-new episodes as The Red Rocker (Hagar) talks and rocks with a roster of enduring icons. Additionally, the network is proud to welcome the world-famous Seminole Hard Rock Hotel & Casino Hollywood, Florida as the exclusive presenting sponsor of the popular series. The Seminole Hard Rock Hotel & Casino Hollywood, Florida serves as the backdrop for one of the season's most unforgettable episodes when Hagar heads to the resort and casino to perform his biggest hits on the Hard Rock Event Center's legendary stage.

As part of AXS TV's partnership with the Seminole Hard Rock Hotel & Casino Hollywood, Florida, the network will present a series of weekly vignettes covering the latest in music news and information in the Seminole Hard Rock Hollywood Music Minute, covering everything from concert tour dates and artist announcements, to music festival news and profiles of up-and-coming artists. Additionally, the series will highlight events at the Seminole Hard Rock Hotel & Casino Hollywood, Florida, while taking viewers behind the scenes on the venue's storied grounds, which includes the renowned Rock Vault — the temporary home to Hagar's trademark checkered suit worn during his performance with VAN HALEN at the 1992 VMAs. The iconic ensemble is now on display along the marble-floored concourse of the newly opened casino at the resort, right next to David Bowie's "Glass Spider" red suit, which he wore during the 1987 tour.

"I am so proud to be able to host this wild and crazy show for a fourth season," Hagar said. "This is pure fun for me, getting to go around just hanging out and playing music with some of my favorite people in the world. It's humbling to see that our viewers dig it as much as I do. I'm excited to keep this party going!"

"Sammy Hagar is the quintessential rock star — simultaneously larger-than-life and incredibly down-to-earth," said Evan Haiman, AXS TV's vice president of music programming and production. "He hasn't just lived through rock history, he's made rock history, and the deep passion he has for music resonates in every episode. AXS TV is proud to welcome the popular series back for a fourth season, packed with even more of the candid conversations and all-star jam sessions that our viewers love."

"As one of the most iconic entertainment venues on the planet, it made perfect sense for Seminole Hard Rock Hotel & Casino Hollywood to partner with Sammy Hagar and AXS TV as the presenting sponsor for the 'Rock & Roll Road Trip' series," said Auggie Cipollini, president of Seminole Hard Rock Hotel & Casino Hollywood. "Our culture is built on music, having fun and being a little irreverent on occasion. Most of the celebrities that Sammy interviews on the show will most likely have visited or performed at one of our Hard Rock venues. This is going to be a great partnership and we are thrilled that we have the opportunity to showcase rock and roll history and today's most interesting celebrities to such a passionate and loyal audience."