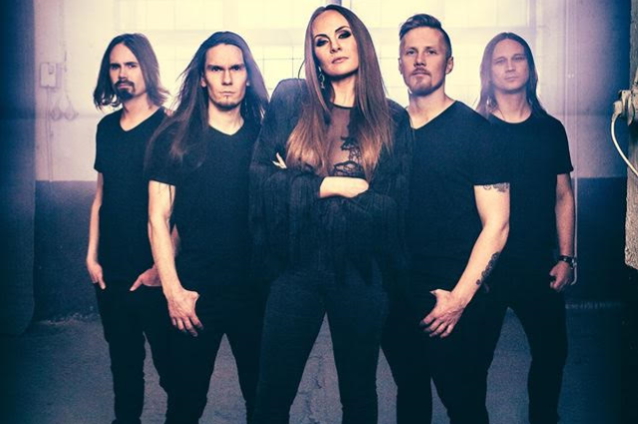 Frontiers Music Srl has announced the signing of SMACKBOUND to a multi-album deal.

SMACKBOUND is a metal band from Helsinki, Finland featuring the multi-talented vocalist and actress Netta Laurenne, who founded the group in 2015. Guitarist Teemu Mäntysaari (WINTERSUN) was the first to connect with Netta in the band and they were soon joined by Rolf Pilve (STRATOVARIUS, WINTERSUN) on drums, Vili Itäpelto (TRACEDAWN) on keyboards, and Tuomas Yli-Jaskari (TRACEDAWN) on bass.

"I am so happy to belong to the Frontiers family," says Laurenne. "SMACKBOUND was looking for a deal and wanted to partner with someone who shows true passion in working with us. After several months of discussions, we agreed that Frontiers was the right label for us. The journey is just beginning. Thanks for walking with us."

Soon after its formation, SMACKBOUND started crafting its own songs while simultaneously forming a cover band, RUN FOR COVER, to begin developing their live chemistry without delay. Songs came together quickly and the band debuted with a string of successful videos and singles, including "Drive It Like You Stole It", "Wall Of Silence" and "Run", which caught the attention of Frontiers A&R team, who are always on the hunt for the best emerging talent. After immediately being floored by these three songs, Frontiers reached out to the band to begin conversations, which ultimately culminated in a deal being struck. The three aforementioned singles will be included on the band's debut album, "20/20", which is expected to be released worldwide in early May.

"We wanted to make metal mixed with all the goodies we love in music, yet you can't beat the force and energy of metal. That's why we brought everything to it," says Netta. She adds about the album title: "The name reflects the message of the whole album. It's time for us all to have 20/20 vision. We wanna get to the bottom of things and cut the bullshit. We show ourselves in the good and the bad, both vulnerable and angry, and ask for honesty and integrity in return. We do this with unconditional love and by not having lost faith in the world. We call out for the truth."

"20/20" was recorded at Sonic Pump Studios, produced by the band, and mixed and mastered by Jesse Vainio (SUNRISE AVENUE, APOCALYPTICA, POETS OF THE FALL).