WITCHBREED, the female-fronted Portuguese metal band formed by bassist Ares (ex-MOONSPELL, DEEPSKIN) and guitarist Dikk (ex-DEEPSKIN),has posted a cover version of the IRON MAIDEN classic "Children of the Damned" on its MySpace page.

Commented the group: "On the verge of releasing our debut, 'Heretic Rapture', we decided to offer you all a petite hors d'oeuvre in the shape of our own version of IRON MAIDEN's classic 'Children of the Damned'.

"As you might know we are finally done with the 'Heretic Rapture' recordings, and because we couldn't keep ourselves busy enough while we wait for the final product, we decided to re-work on our first ever cover for a truly metal classic, and actually is quite interesting how it sums up a big part of what 'Heretic Rapture' sounds like, although this song is not included on the album nor it was recorded during the album sessions we recorded it by ourselves and we hope you will enjoy it as much as we do."

WITCHBREED's debut will be released via Ascendance Records. 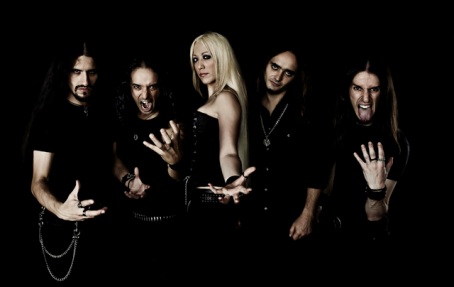