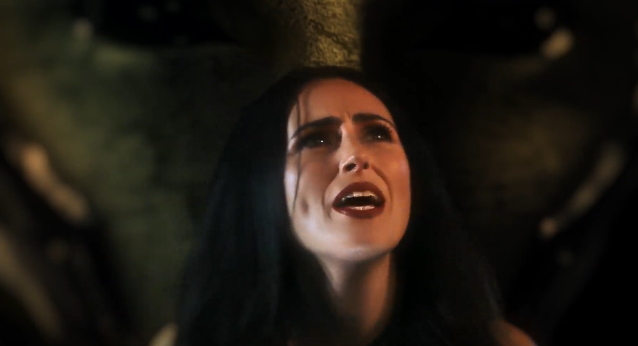 WITHIN TEMPTATION Drops Music Video For New Single 'The Purge'

Dutch heavy rockers WITHIN TEMPTATION have released the official music video or their brand new single "The Purge", the follow-up to "Entertain You". You can now watch it below.

"The Purge" is a high-energy rock song that shows the diversity of WITHIN TEMPTATION's musical progression. Now that all 2020 shows have been canceled due to the COVID-19 pandemic, the band remains productive by focusing on writing and releasing new songs. Therefore, more singles are to come.

Frontwoman Sharon Den Adel told Germany's Rock Antenne about the track: "'The Purge' is about self-reflection; that's the main theme of the song. It's about the choices in life everone makes. And sometimes when you make the big choices in life — what kind of life you're gonna lead; how you're gonna lead it; what political choices you make — everything you do in life, all these big choices, they have a certain effect also, of course, on people around you. We take one road, and you exclude a lot of other roads. And that also has an impact on other people's lives sometimes, and you have to deal with that when you get to a certain point in your life."

She continued: "I think probably most people can relate to that, because the whole world has come to a stop, all of a sudden, in this roller coaster we're all living in. So maybe people will be able to relate to that, because I think a lot of people had time for self-reflection. It's more a mental cleansing than it's actually a physical one."

Speaking to Kerrang! about WITHIN TEMPTATION's plans to release three standalone singles in 2020, Sharon said: "It's something we've wanted to try for a long time already: to be able to share new music in a quicker way, instead of having wait two or three more years before an album comes out. Something sometimes feels better in the moment rather than having to wait a few years until the album comes out.”

When asked about the streaming world and if albums have perhaps lost a bit of impact these days, she said: "I think albums and streaming services are two different things; they serve a different purpose. One is more physical of course — you can read the lyrics and look at the artwork — and the other one is more direct, an easier way to access music. It doesn't have to stand in the way of each other, as it serves a different purpose in my opinion."

"Entertain You" kicked off of a series of digital single releases and exceeded all expectations. "Entertain You" was No. 1 most added on the Billboard Mainstream Rock Indicator chart, with airplay on at least 40 radio stations, including Music Choice, SiriusXM Octane, WZOR and KQXR, No. 5 in the Contraband Metal chart, and at No. 18 in the Billboard Mainstream Rock Indicator chart in USA.

WITHIN TEMPTATION released the official music video for "Entertain You" in May. The song was a surprisingly quick follow-up to WITHIN TEMPTATION's seventh studio album, "Resist", which came out in February 2019.

"Entertain You" arrived one week after the last show of the "Worlds Collide" tour was supposed to happen. The co-headline trek with American rock band EVANESCENCE was originally planned for April, but due to the COVID-19 pandemic, it has now been postponed to September 2021. The trek, for which an impressive 150,000 tickets were sold in eight countries, is slated to take place across venues such as the O2 Arena in London, AccorHotels Arena in Paris, Velodrom in Berlin, and Palais 12 in Brussels.