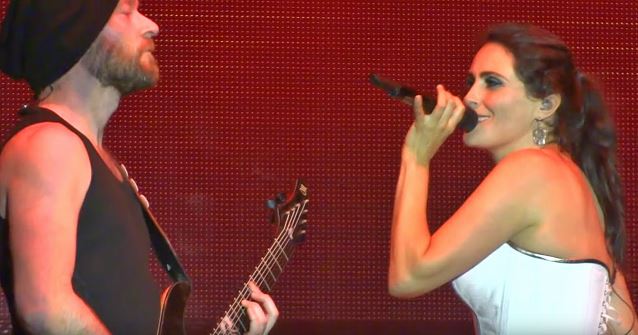 Jägermeister conducted an interview with guitarist Ruud Jolie of Dutch symphonic rockers WITHIN TEMPTATION at this year's Bloodstock Open Air, which is being held August 6-9 at Catton Park, Derbyshire, United Kingdom. You can now watch the chat below.

On where WITHIN TEMPTATION will go, musically, on the follow-up to last year's "Hydra":

"That is always a very interesting question. In the past, we always had some idea where we would go, but with the last two albums, it was just, you know: 'Let all the ideas come and see wherever it would take us.' And I guess that's something that we're gonna… the same approach we're gonna do now with the next album. So I don't know yet. I think it's… That's what I heard… that the ideas were gonna be a little more orchestral again. But you never know."

On whether WITHIN TEMPTATION is even thinking about a new album already:

On whether WITHIN TEMPTATION tries to keep the fans happy with each album while also staying true to the band's sound:

"I think that the most important thing is that we keep being true to ourselves. Because if you compare the very first album, [1997's] 'Enter' album, the album on which I didn't even play back then, and this latest album, 'Hydra', it's completely different — it's completely different. So I'm sure that we lost a lot of fans from that era, but we gained a lot of new fans with this album. And, for us, it's really important to keep evolving. We're not the type of band that has found one formula and keeps on expanding that formula, like AC/DC or whatever. Not that there's anything wrong with that, but we're not that type of band. And I think it's inevitable that you lose some people here and there."

WITHIN TEMPTATION released a new live DVD/Blu-ray/2CD, "Let Us Burn - Elements & Hydra Live In Concert", on November 14, 2014. The set features two of WITHIN TEMPTATION's most-talked-about arena shows ever. The two dates are 2012's resplendent 15th birthday "Elements" concert and the final night of the "Hydra" European arena tour at Amsterdam's Heineken Music Hall in May 2014.