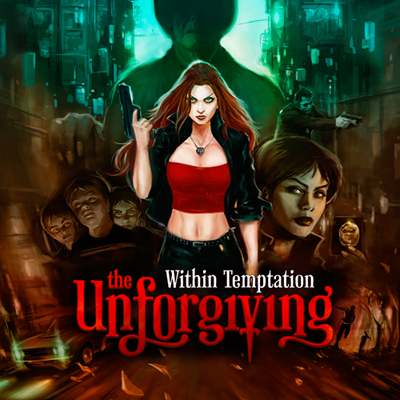 "Faster", the new single form Dutch female-fronted symphonic metallers WITHIN TEMPTATION, can be streamed in the YouTube clip below. The song comes off the band's long-awaited new concept album, "The Unforgiving", which was produced by Daniel Gibson and is based on a comic book story written by script writer Steven O'Connell (BloodRayne, Dark 48). The band asked comic artist Romano Molenaar (Witchblade, Darkness, X-Men) to draw the characters and scenery of "The Unforgiving", which is set for release via Sony Music in Continental Europe and Roadrunner Records in the U.S., U.K. and Ireland, Japan and Australia.

Fans recently had the unique opportunity to secure a personal credit in the special edition of "The Unforgiving" by sharing the video for the new album track "Where Is The Edge" with their Facebook fans. The video for "Where Is The Edge" contains exclusive preview scenes of the upcoming movie "Me & Mr. Jones", directed by Oscar-winning Dutch director Paul Ruven. The movie is a thriller inspired by the disappearance of Natalee Holloway on Aruba, the island where also the movie itself has been secretly shot.

"The Unforgiving" storyline unfolds week by week when the band reveals new prequel pages on its homepage. With the album art featuring the main characters of the comic story such as red-headed beauty "Sinéad Harkin" (Queen),WITHIN TEMPTATION fans around the globe will have more clues to discuss the question who are "The Unforgiving."

Commented WITHIN TEMPTATION: "The song 'Where Is The Edge' is based on the story of 'The Unforgiving', a graphic novel written by Steven O'Connell. However, there is a clear link between the storyline of our new concept album and the thriller 'Me & Mr. Jones' as they both deal with mystery, murder, guilt, and a lack of forgiveness."

WITHIN TEMPTATION recently postponed its previously announced European tour after it was revealed that the band's frontwoman, Sharon den Adel, was pregnant with her third child (father is WITHIN TEMPTATION guitarist Robert Westerholt). The couple has a one-year-old son, Robin Aiden Westerholt, and a five-year old daughter named Eva Luna den Adel.

Drummer Stephen van Haestregt left WITHIN TEMPTATION earlier in the year in order to focus on his family life and work as a studio technician.