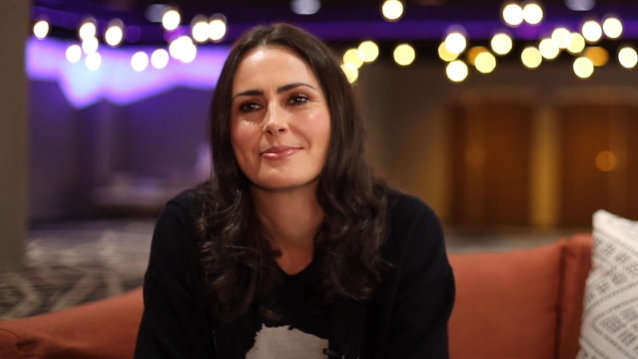 In recent years, Dutch heavy rockers WITHIN TEMPTATION shifted their focus from releasing albums to releasing a series of singles, enabling the bandmembers to indulge themselves in their creative processes thus delivering freshly inspired music. The group has released "Entertain You", "The Purge" and "Shed My Skin", singles that have all thrilled their fanbase, had great critical reception in Europe, peaked in the Top 20 of the U.S. Billboard Mainstream Rock Indicator charts and topped the official German charts. In July, WITHIN TEMPTATION also released the official Jeb Hardwick-directed music video for the band's latest single, "Don't Pray For Me". It is the fourth single of the band's independent releases and will lead up to WITHIN TEMPTATION's next studio album.

In a recent interview with Riff X 's "Metal XS", WITHIN TEMPTATION vocalist Sharon Den Adel spoke about the group's plans for the next LP. She said (as transcribed by BLABBERMOUTH.NET): "Well, we are gonna release a new album. It's gonna have probably the songs that we have already written and have released. I'm not sure if it's gonna be a separate part and then a completely new kind of vibe with the songs that we didn't release yet, because we are gonna try to do some more experimental stuff with the coming songs that we haven't released yet. So I'm not sure if it's gonna be separate two things in one box or if we are gonna do it separately. But it's gonna be fun. We're gonna release at least something new next year."

Last month, Den Adel talked about WITHIN TEMPTATION's new approach to making its music available in an interview with Barbara Caserta of Linea Rock. She said: "We already decided before we had the pandemic to do it this way. A lot of music scenes already do this — music genres, actually — but in the rock [world], we still do a lot of the traditional way of releasing albums. And we just wanted to try this out. And then the pandemic happened, and everybody started doing the same thing. Which is a good thing, because you live in the moment and you write something and you release it… So this is really how we feel at the moment, and it's what we re reflecting with our music, I think. It's a good thing."

Elaborating on the differences between recording and releasing singles and concentrating on making full-length albums, Sharon said: "We put a lot of time extra now into every single, where normally this is the maximum of singles that we release, and we're gonna release more. So I think there's more time spent to it. But it's scattered all over a time, so it's really sometimes difficult to get back into the flow of writing again; that's the negative side of it. So it has its positive and negative sides. And with a whole album, it takes sometimes two years when you've written a song that it finally gets released, and it already feels outdated sometimes. So now it's really [easy to give each track] a fast release."

As for when fans can expect to see a new WITHIN TEMPTATION LP, Sharon said: "I'm back at home in the beginning of December, and then we're gonna finish the rest of the album. So we haven't written the rest yet. So it's gonna take some time. Somewhere next year there will be a new album. But there will be a few singles also still first before we do the album."

This past August, Den Adel told EMP about the WITHIN TEMPTATION songwriting process: "The thing is we've been around for such a long time that we try to be inspired by new bands that we hear and implement it with our own kind of sound and try to stay updated with the sound that is sounding more modern nowadays and what is more 'in' nowadays. Not to be going along with new sounds but something that sounds refreshing and inspiring to us. And that keeps us going and makes it fun for us to make still music. We've been around almost for 25 years, even longer — now I really feel old — but, anyway, you need it; you need to evolve. So there's no formula, but it's more every time looking what inspires you. And it can be anything."