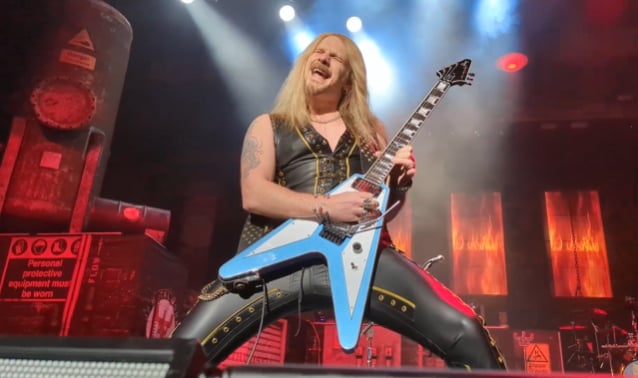 In a recent interview with "Rock Talk With Jacqui Neal", JUDAS PRIEST guitarist Richie Faulkner reflected on his time with the band since he joined in 2011 as the replacement for original guitarist Kenneth "K.K." Downing. He said (as transcribed by BLABBERMOUTH.NET): "It's massive. It evolves over the years. I remember when it first started, the main focus was about the guitar parts; that was kind of what it was about. And the performance, and stuff like that. The more you become a part of the band, it becomes, 'What can we do? How can we do things differently? How can we write a better album? How can we give a better experience for the fans? How can we do this differently? How can we make things bigger, better?' Less about your performance but the performance of the machine that is JUDAS PRIEST. People are buying tickets. They're working, they're spending their money, they're choosing you as a night out.' It turns into that. You become part of a team rather than just focusing on, 'Am I playing the right notes tonight?' More of an all-encompassing thing. And obviously you're concentrating on playing the right notes every night still. But it becomes more of a bigger thing.

"[The band has been around] more than 50 years now," he continued. "It's the 50th-anniversary tour. I've been in the band over 10 years now. We're working on the third album that I've done with them. So as you go into the third record, it's more of that. So how do we make this one different — better quote-unquote. 'Better' is a subjective term, but it's gotta be better from our point of view. And how do we get maybe something that sounds better, or a different journey through the songs, or whatever it may be — better performances. Whatever it is. A concentration on how to make things better for the people that put them there for those 50 years. And you become part of that. So it's an honor to be part of that, really."

In a 2011 interview with the Finnish newspaper Ilta-Sanomat, Halford stated about Faulkner's physical resemblance to a younger Downing: "People are saying, 'It's a clone. You've got some of K.K.'s DNA.' It's just the way it turned out. We made, like, a secret search. When we knew K.K. was not gonna be making the tour, we did a lot of secret, kind of, searching for another player. And Richie just happened to be the guy. And he just happens to look a little bit of the K.K. image, you know?! I think it would be silly to say, 'We looked for a guitar player that looks like Ken.' What we want is a very good metal guitar player, and that's what Richie Faulkner is."