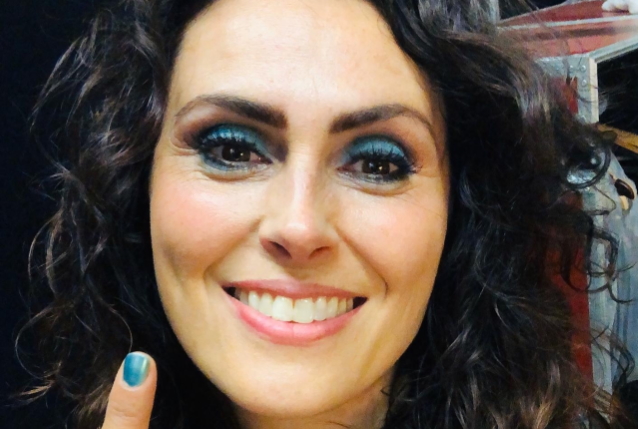 WITHIN TEMPTATION's SHARON DEN ADEL Praises IRON MAIDEN: 'They Never Fell Out Of Love With Music'

In a new interview with "The Mistress Carrie Podcast", WITHIN TEMPTATION singer Sharon Den Adel spoke about her admiration for IRON MAIDEN whom her band is currently supporting on the fall 2022 North American leg of the "Legacy Of The Beast" tour. She said (as transcribed by BLABBERMOUTH.NET): "That's what I appreciate about IRON MAIDEN. Every night when we are playing, Steve Harris [IRON MAIDEN bassist and founder] is actually standing on our stage watching our show, behind our gear… And he's enjoying himself. And every night when we come off stage, he's at the side of the ramp giving hi-fives and stuff. He's really nice, and the rest of the band as well, and crew. But it's really fun to see someone still like a 16-year-old enjoying every show we play — almost every night the same kind of songs, more or less; because we only have 45 minutes, we wanna give the best we have. And he's still every night there. And I think that's what music is about.

In recent years, WITHIN TEMPTATION shifted its focus from releasing albums to releasing a series of singles, enabling the bandmembers to indulge themselves in their creative processes thus delivering freshly inspired music. The group has released "Entertain You", "The Purge" and "Shed My Skin", singles that have all thrilled their fanbase, had great critical reception in Europe, peaked in the Top 20 of the U.S. Billboard Mainstream Rock Indicator charts and topped the official German charts. In July, WITHIN TEMPTATION also released the official Jeb Hardwick-directed music video for the band's latest single, "Don't Pray For Me". It was the fourth single of the band's independent releases and will lead up to WITHIN TEMPTATION's next studio album.

This past summer, Sharon told Finland's Chaoszine about WITHIN TEMPTATION's plans for a new studio LP: "We don't have an official [release] date yet, but we are working, as we speak still, on finishing songs. And, of course, we have released a lot of songs during the corona time; those songs are gonna be on the album as well. So I think we have to finish up, like, a third still, and we're gonna do it in the beginning of next year. And somewhere next year we will release a new album — with the songs that we already released, of course."

The remainder of WITHIN TEMPTATION's 2022 will be filled up with a much-anticipated and long-delayed co-headlining European tour with EVANESCENCE.