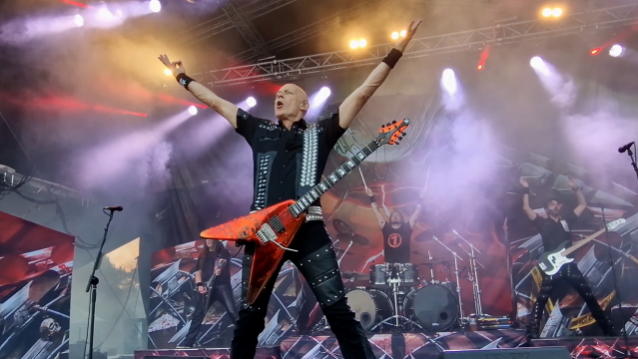 WOLF HOFFMANN Praises ACCEPT's Three-Guitarist Setup: 'We Love It, The Fans Love It, And It Makes A Difference'

ACCEPT guitarist Wolf Hoffmann discussed the decision to expand the band's lineup in a new interview with "The Chuck Shute Podcast". He said about having three guitarists in the group: "It sounds killer. It's a lot of fun. We love it, the fans love it, and it makes a difference. It's great.

Asked if his guitar is the loudest in the mix when ACCEPT performs live, Wolf said: "No. It's not quite like that. We've got a great sound team, a sound guy, and we wanna make sure that you actually hear all three guitar parts. It's not just one guitar dominating everything — for sure not. And Phil and I are doing a lot of dueling leads, I share a lot of the lead stuff with Phil, and then Uwe is mostly doing rhythm stuff in the background, but he also comes forward for a few leads where we actually have triple leads — during 'Fast As A Shark'. So there's a lot of interesting parts for all of us. And it works out fantastic."

Pressed about whether all three guitarists in ACCEPT are "always doing something different" when performing live, Wolf said: "Not always something different. Sometimes we all riff on the same riff and it sounds incredibly powerful. But when appropriate… We found a lot of new parts for Phil to play that were originally overdubs on the albums that we could never quite reproduce. 'Cause you have to make a choice — if there's more than two guitars, you usually take the most important or the most prominent stuff. But having the luxury with our third guitar player now, we can actually dedicate some of that stuff and come up with new sounds that are complementary or even different voicing sometimes on the same chord, make it more interesting. So we took our time during rehearsals to make it as interesting for everybody as possible. And it opens up everything quite a bit. For instance, a song like 'Princess Of The Dawn', there's a bunch of overdubs on that album that we never were able to play live, but now we can."