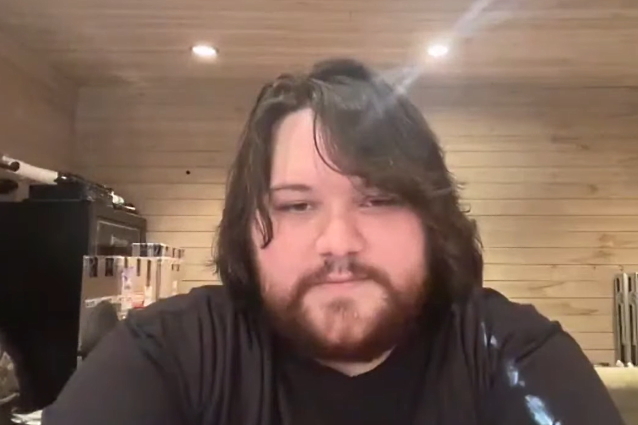 WOLFGANG VAN HALEN: Being Nominated For a GRAMMY Is 'Unbelievable'

Former VAN HALEN bassist and current MAMMOTH WVH frontman Wolfgang Van Halen joined Matt Pinfield for this week's episode of 95.5 KLOS's "New & Approved" show. Wolfgang chatted with Matt about the excitement of being nominated for a Grammy Award for MAMMOTH WVH's song "Distance" before discussing how he started playing music as a child. While his father Eddie Van Halen helped, he also let Wolfgang find his own journey as he explored drums, guitar, bass, and keyboards. Wolfgang also talked about MAMMOTH WVH's self-titled debut album and he went into detail about the album's single "Epiphany". He went on to chat about his greatest influences, including Prince, Dave Grohl, BLINK-182 and AC/DC, and what inspired him to play every instrument on the LP.

Regarding what his reaction was like to the Grammy nomination, Wolfgang said: "That was a pretty crazy morning. Gosh, it's just something I never could have expected from this in any way at all. I write and do all this music just kind of 'cause it's what makes me happy, and to see that it resonated enough with people and to have it be nominated for a Grammy is just kind of unbelievable."

As previously reported, MAMMOTH WVH and DIRTY HONEY recently postponed the launch of their "Young Guns" co-headlining tour to February 20 from the previously announced January 18.

Writing all the songs and performing all the instrumentation and vocals for the debut album, Wolfgang Van Halen set out to establish his own musical identity. From the rocking opening guitar riff on album opener "Mr. Ed" to the driving bass and drums on album closer "Stone", "Mammoth WVH" showcases the various musical influences that have inspired Wolfgang. Songs like "Resolve", "The Big Picture" and "Think It Over" are all sonically different from each other but unique to what MAMMOTH WVH is.