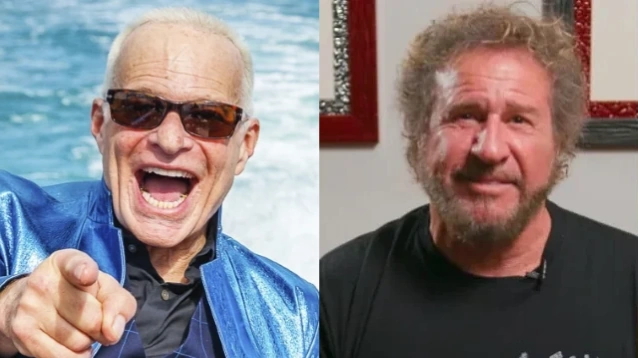 Wolfgang Van Halen has once again refused to pick sides in the unending debate about whether VAN HALEN is better with David Lee Roth or Sammy Hagar.

The 29-year-old bassist, who started playing with VAN HALEN when his father Eddie and uncle Alex reunited with Roth in 2007, broached the "Roth-versus-Hagar" topic while answering questions on Twitter.

After one fan asked Wolfgang which era of VAN HALEN is better, he responded: "They both kick ass. The war is dumb. Enjoy whatever you want and don't hate someone else if they don't like what you like." Apparently referencing his father's musical contributions to VAN HALEN's entire catalog, Wolfgang added: "The same guy wrote the music too, so you're doing yourself a disservice for not at the VERY least checking the other side out."

Wolfgang's latest comments echo those he made last month when a similar question was posed to him on Instagram.

"I'm not a purist. It's all great," Wolfgang said. "The same guy wrote all the music. Kinda dumb not to give it a chance if you like one or the other so much."

Later that day, Wolfgang was asked via Twitter to name his favorite albums from both VAN HALEN eras. He replied that was particularly fond of "Fair Warning" and "1984" with Roth and "Balance" and "For Unlawful Carnal Knowledge" with Hagar.

Asked about his so-called "rivalry" with Roth, Hagar told Planet Rock magazine: "It wasn't even a blip on my radar.

"I don't respect Dave's artistry, but I do think he's clever and a great showman and what he did with VAN HALEN in the early days was fantastic. VAN HALEN couldn't have made it without him.

"God bless Dave, but he refuses to acknowledge that VAN HALEN with me was even more successful than VAN HALEN with him, and that's very stupid of him. That'd be like me not acknowledging what he did for the band before I joined: that would be stupid, wouldn't it?"

Hagar told The Pulse Of Radio a while back that his problems with Eddie Van Halen began during the sessions for "Balance", Hagar's last album with the group. "Eddie needs somebody to make decisions and a leader, y'know?" he said. "He's not a natural born leader kind of guy. And his brother [Alex Van Halen] was always the leader before — or Roth was the leader before — and when Roth left, his brother and him bumped heads so much, when I walked in it was like, 'Well, what does Sam wanna do?' y'know? So it became kind of like, yeah, I was making all the decisions, so then on 'Balance', all of a sudden, he didn't like my decisions and it was like really weird."

Hagar blasted his former bandmates in an interview in 2015, saying there was "no chemistry" between the members of the group's current lineup, including Roth. He said at the time: "They don't like each other. I mean, it's obvious. It's like a backup band with a guy out there in front. I bet they don't say five words to each other offstage."

They both kick ass. The war is dumb. Enjoy whatever you want and don’t hate someone else if they don’t like what you like.

The same guy wrote the music too, so you’re doing yourself a disservice for not at the VERY least checking the other side out. https://t.co/nP54CFvDEK