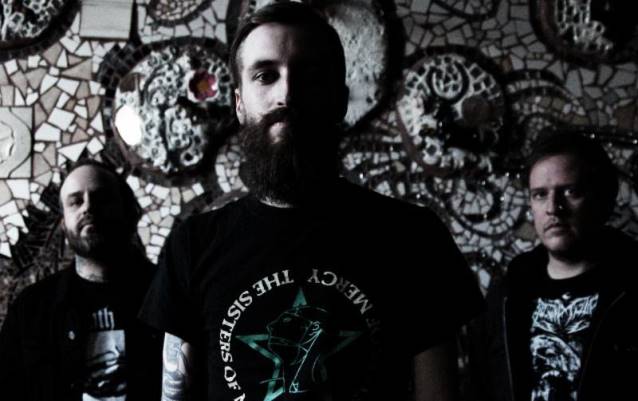 Midwestern black/death rock nihilists WOLVHAMMER are currently deep in the process of laying down the tracks that are to become the band's third LP, due this summer via Profound Lore.

Occupying Hideaway Studio in Minneapolis, Minnesota, WOLVHAMMER is tracking its full-length follow-up to 2011's "The Obsidian Plains" with Dan Jensen at the soundboard, with eight new tracks penned for the as-yet-untitled CD. Guitarist Jeff Wilson stated about the recording process, "Just waking up on what is day five of recording for LP #3... fortunately for myself, not hung over today. We finished up all of the drums/auxiliary percussion last night, which means we'll be knocking out guitars and bass for the next three days or so. Wrapping it up on Wednesday and shipping it off to be mastered. This one is definitely going to come out of left field for some of those familiar with our other material. Be forewarned."

In addition to Wilson, also of ABIGAIL WILLIAMS, CHROME WAVES, DOOMSDAY, ex-NACHTMYSTIUM and more, WOLVHAMMER is comprised of drummer Heath Rave (ex-ACROSS TUNDRAS),bassist Joe Noel (ex-SAMOTHRACE, ex-ALTAR OF PLAGUES) vocalist Adam Clemans (SHAIDAR LOGOTH) and guitarist Brendan Seven. Following several independent releases, their "Black Marketeers Of World War III" debut LP was released by Init Records in 2011, catching the attention of Profound Lore, who brought the band onto the label's roster for the release of their critically acclaimed follow-up LP, "The Obsidian Plains", that same year. The band also released a split covers EP with THE ATLAS MOTH in 2013.

Upon its completion, details on the new album's official summer release date and more will be unveiled in the coming weeks. WOLVHAMMER will, of course, take to the highways in support of the release over the coming months with a U.S. tour already being devised in conjunction with its street date.