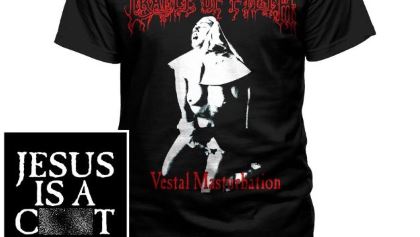 According to Radio New Zealand, a woman attempted to spraypaint the "offensive" CRADLE OF FILTH T-shirt which was selected to be displayed at the Canterbury Museum in Christchurch, New Zealand.

Director Anthony Wright of Canterbury Museum said the woman was asked to leave the exhibition Tuesday morning (February 17) after she sprayed black paint onto a perspex barrier.

No damage was reportedly caused to the exhibit and the paint had since been cleaned up.

The museum has defended its right to include the t-shirt in question in the exhibition, which "explores the story of the garment over its 100-year history and the way in which t-shirts have been used as an expression of popular culture."

According to TVNZ, the Taxpayers' Union has called the exhibition a poor use of ratepayer money.

"Our objection isn't to the t-shirt per se, our objection is ratepayer money being used for what is, at best, an item with little cultural or historic value," Taxpayers' Union executive director Jordan Williams said.

"In matters of taste there is a higher onus on publicly funded bodies to avoid funding matters of a highly dubious nature. One can argue that restrictions on freedom of speech and blasphemy are unjustified, while also acknowledging that higher standards should apply to what public money is used to promote."

Wright of Canterbury Museum explained that the shirt in question was "a tiny part of the overall exhibition" and it is there "because it is a valid part of an overall story about a whole cultural movement."

He said: "We've got to balance that up against anyone that might be offended, and we've bent over backwards to make sure that anyone who might be offended won't come into contact with anything offensive."

According to the Australian Herald Sun newspaper, a Gold Coast teenager was charged in 2008 by police for wearing a CRADLE OF FILTH t-shirt with the same design. The teen was charged with offensive behavior under the Summary Offences Act 2005 for public nuisance.

Metro newspaper reported in October 2005 that a British teenage heavy metal fan was handed a community service order for wearing the same shirt.

Adam Shepherd, who was 19 at the time, was reportedly convicted under the then-new anti-hate laws which ban people from displaying religiously insulting signs.

According to MediaWatchWatch.org.uk, the wearing of this T-shirt had led to at least two previous convictions in the UK.

Dale Wilson, 35, of Norwich, was arrested by two police officers as he walked to the newsagents on Halloween 2004. He pleaded guilty to "religiously aggravated offensive conduct." He was eventually discharged and told to "grow up." He paid 150 costs (approx. $266),and the judge ordered that the T-shirt be destroyed.

Back in 1997, Rob Kenyon, 29, of London was found guilty of committing the offense of "Profane Representation under the 1839 Act" by Bow Street Magistrates Court. He was fined. 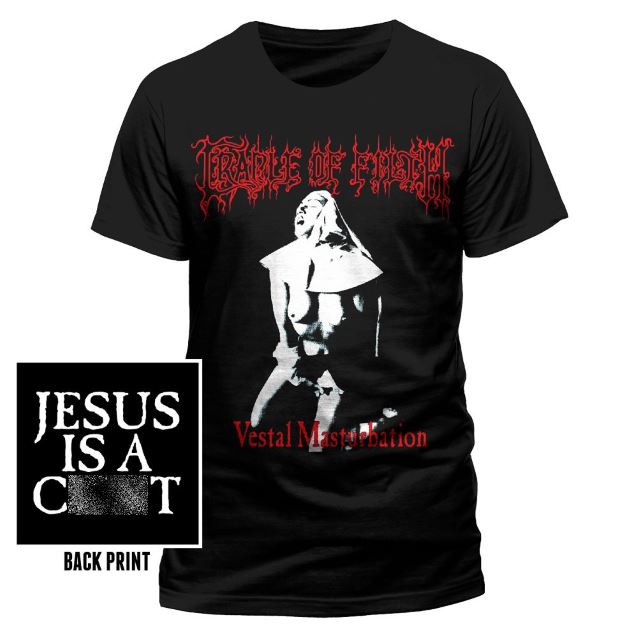