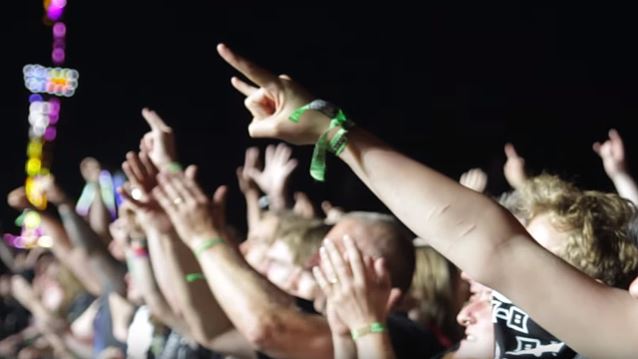 A woman was sexually assaulted in her tent during this year's edition of the Bloodstock Open Air festival, which was held August 11-14 at Catton Hall, Walton-On-Trent, West Midlands, United Kingdom.

The 28-year-old woman was in her tent sometime between 2:50 p.m. and 3:20 p.m. on Sunday, August 14. A man came into the tent and sexually assaulted her. She struck his hand with a torch and the man left.

She has described the man as being white with a tanned complexion and in his late 20s. He has mousey hair, which was around three inches long and has grey eyes with blue flecks in.

His teeth are uneven and he has acne scars on his face. He wore tan shorts and a black t-shirt with the name of a band on, although the victim cannot recall which band.

Bloodstock organizers say: As you all know, Bloodstock is one of the safest and friendliest festivals in the country, and this is primarily because of the sense of community that you help create.

"To say that we were shocked and upset by this crime is an understatement, and our thoughts are with the victim.

"We think it's pretty likely that someone will recognize the description of the perpetrator and we urge anyone who might have any information to get in touch with the police as soon as possible. We also respectfully ask that you don't engage in public discussion or speculation about this on the Bloodstock forums or anywhere else on the web.

"If the police can catch the perpetrator of this horrendous crime, no one would want the chance of successful prosecution harmed by prejudicial comments posted online.

"The safety of everyone at Bloodstock remains our priority and we'll review our operations with the relevant authorities over the next few months."

Police are appealing for anyone with information to get in touch and are asking people to share this appeal, as the man involved may not come from Derbyshire.

He may have complained to friends and family about a pain in his hand.
Detective Sergeant Jim Shinfield said: "This was an isolated incident at what was otherwise an uneventful festival.

"If the description of this man matches that of someone you know who went to the festival, please get in touch."

Witnesses or anyone with information should call DS Jim Shinfield on 101, quoting reference 16000235606.

Alternatively, send him a message online by visiting the Contact Us section of the Derbyshire police web site.