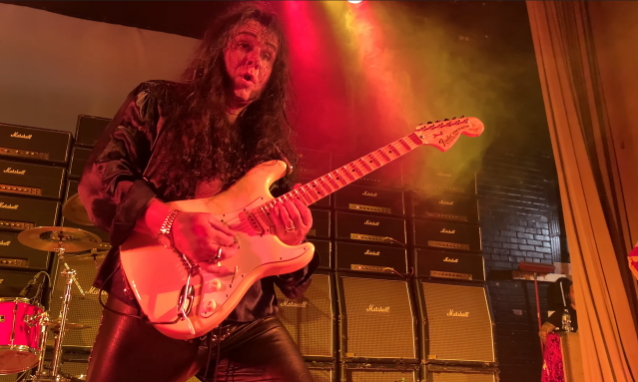 Would YNGWIE MALMSTEEN Ever Consider Joining Another Band? He Responds

During an appearance Friday (August 19) on SiriusXM's "Trunk Nation With Eddie Trunk", legendary Swedish guitarist Yngwie Malmsteen was asked if he would ever consider joining another band as opposed to focusing solely on his solo career. He responded: "Well, I'm not saying never for anything, but most likely not. Because I'm in a rock and roll setting, like everybody knows — it's a rock and roll band, basically, on stage — but the way I create is very much like a painter or writer where… I don't paint half a painting and call my friend up and [say], 'Hey, can you come finish half the painting for me?' That's the only thing. It's not because I'm egotistical; it's just an artistic expression thing. Going out with 'Generation Axe' is more than enough to be a band than anything," he added, referencing the "Generation Axe" tour, which took place over several legs between 2016 and 2019, and featured a bill that included Malmsteen, Steve Vai, Zakk Wylde, Nuno Bettencourt and Tosin Abasi. "So I'm doing that too."

Since 1983, Malmsteen has released albums with the bands STEELER and ALCATRAZZ, as well as 22 studio albums of his own, including last year's "Parabellum". He has also been part of Joe Satriani's "G3" tour. In addition, Yngwie has composed a "Concerto Suite For Electric Guitar And Orchestra" and has played on tribute albums to DEEP PURPLE, QUEEN, SAXON, VAN HALEN, OZZY OSBOURNE and others.

"Parabellum" was released in July 2021 via Music Theories Recordings/Mascot Label Group. Only four of the songs on the album feature vocals. The album title "Parabellum" is Latin, translating as "Prepare For War".

In a 2021 interview with Eonmusic, Yngwie was asked how he has managed to maintain his amazing guitar technique after all these years. He responded: "I think that if you dedicate so many years, so much intensity and so much dedication and so much passion into something and you do it and you're very relentless and you have a goal and you refuse to accept any failure on it, if you do that for so many goddamn years, it becomes much more second nature than anything else. You also remember that technique is only a means to get music out; it's not technique for the sake of technique."

He continued: "I use the term 'relentless'; I'm completely unstoppable. If I just put my mind to something, I will not stop until I'm there, and that includes reaching a certain level of the instrument or whatever it may be. It could be anything in life, basically. So, obviously I don't accept any sort of sloppiness or half-assed shit. If I feel inspired, I play more, but then if I'm on the road, I play more than I should, and if I'm in the studio I play a lot too, so it's never really a downtime on it. And if there's no touring or no recording, I play anyway, because I love it."