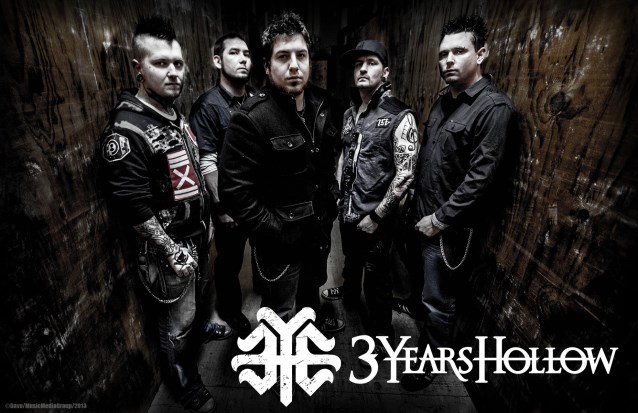 Picture what a combination such metallic-yet-melodic bands as CHEVELLE, DISTURBED and SEVENDUST would sound like, and you're not far off from 3 YEARS HOLLOW. Hailing from the Quad Cities (Illinois, Iowa),3 YEARS HOLLOW is comprised of Jose Urquiza (vocals),Tony Reeves (guitar),Neil Kuhlman (guitar, vocals),Dex Digga (bass) and Chris Cushman (drums),and the band is certainly creating a buzz with rock fans throughout the country, resulting in the recent recording contract with Imagen Records.

"We are proud to add 3 YEARS HOLLOW to Imagen's increasing lineup," said Bob Winegard, president of Imagen Records. "We first noticed them in the Ernie Ball Battle of the Bands powered by Imagen in last year's Uproar Tour." Morgan Rose, newly minted A&R V.P. at Imagen (and drummer of SEVENDUST),added, "We had them out for a few dates and I was floored, extremely tight and energetic. Jose was spot-on every night. The kids were all over them. I wanted them on our label."

Stated 3 YEARS HOLLOW: "It's such an amazing feeling to sign with Imagen Records. It feels like we're able to end one chapter and start a new one with a brand new excitement. This not only opens up more opportunities for us, but also allows us to give more to our fans. That's something that's always been important to us. We're looking forward to working with a group of people and a label that believe in our vision and dream as much as we do."

3 YEARS HOLLOW has already made their presence felt on SiriusXM Octane, when the station added the song "Remember" to rotation. The band has also shown that they can deliver the goods on the concert stage, as evidenced by dates with the likes of EYE EMPIRE, SEVENDUST and LACUNA COIL.