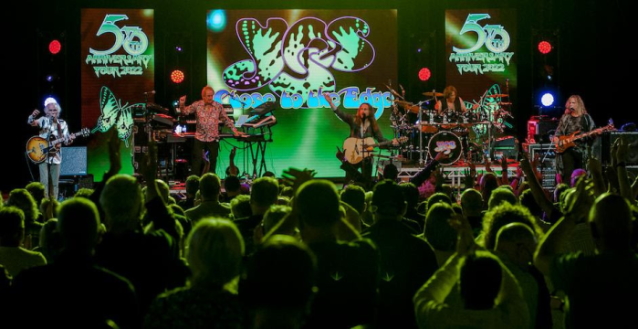 YES To Celebrate 50th Anniversary Of 'Close To The Edge' With Fall 2022 U.S. Tour

Prog rock pioneers and Rock And Roll Hall Of Fame inductees YES have revealed the dates and details for the U.S. leg of their "The Album Series Tour 2022," celebrating the 50th anniversary of their 1972 iconic album "Close To The Edge". This marks the band's first trek in the U.S. since 2019 and will kick off with two shows in Glenside, Pennsylvania at the Keswick Theatre on Friday, October 7 and Saturday, October 8 and wrap in New York at the NYCB Theatre on November 19. Tickets will begin to go on sale on Friday, September 2; check local listings for information. See the full tour dates below.

As with "The Album Series Tour 2022," which started off in the U.K. this past June, the U.S. tour is dedicated to the late Alan White — the band's legendary drummer — following his passing this past May. Before the tour gets underway, a special tribute concert — "Alan White - Celebrating His Life And Music" — will be held on October 2 at the Paramount Theatre in Seattle.

Alan White joined YES in June 1972, just days before their "Close To The Edge" tour began. Over the following 50 years, Alan would appear on every YES album, including 2021's "The Quest". Following the global pandemic, he had been looking forward to this tour and re-joining his bandmates on stage, something he lived for, in the run-up to his 50th anniversary of joining YES. Sadly, that was not be, but Alan's towering presence will be omnipresent on the tour. Alan's good friend, drummer Jay Schellen, will join YES for the forthcoming tour, alongside Steve Howe (guitars and backing vocals),Geoff Downes (keyboards),Jon Davison (lead vocals) and Billy Sherwood (bass guitar and backing vocals).

The "Close to the Edge" show will comprise full production and a high-definition video wall directed by Andy Clark and featuring the artwork of Roger Dean.

Following the release of "The Yes Album" and "Fragile" in 1971, YES released what is widely considered one of the most defining albums, not only for YES but for the whole progressive movement. "Close To The Edge" became an inspiration for their contemporaries and for successive generations of musicians. The album is saluted with a cover story in the September 2022 issue of the national magazine Guitar Player, for which Steve Howe was interviewed. He recalls: "We were young, enthusiastic, and adventurous, and we had this incredible breakthrough success with 'Fragile'. We saw our next album as a real opportunity to prove our worth as a band. The door had been opened and we weren't going to go backward. We wanted to sharpen our skills as far as writing and arranging."

Journalist Joe Bosso wrote about the album's place in rock history in Guitar Player (September 2022): "Vast, enigmatic, full of moments of spectacular grandeur and ever-changing hues, 'Close To The Edge' is the 'Lawrence of Arabia' of progressive-rock albums. Comprised of just three tracks — the dizzying side-long, 18-minute title track, the equally sprawling mini epic 'And You And I', and the whacked-out, hyperactive jazz-funk album closer 'Siberian Khatru' — 'Close To The Edge' documented YES operating at the peak of their musical powers."

Formed in 1968 by Jon Anderson and the late and much-missed Chris Squire, YES have been one of the most innovative, influential and best-loved bands in rock music history. Their 1970s albums "The Yes Album", "Fragile", "Close To The Edge", "Yessongs" (a triple live album set),"Tales From Topographic Oceans", "Relayer" and "Going For The One" were ground-breaking in musical style and content. Their music also became synonymous with artist Roger Dean whose distinctive YES logo design and artwork adorned the lavish gatefold presentation sleeves of many YES albums.

With sales of over 50 million records, the Grammy Award-winning YES were inducted into the Rock And Roll Hall Of Fame in 2017 where they performed "Roundabout" from the album "Fragile" and the FM radio-friendly "Owner Of A Lonely Heart" from the 1985 album "90125". In 2021 YES released their 22nd studio album, "The Quest", produced by Steve Howe, which went to No. 1 in the UK rock chart and entered the official U.K. album chart at No. 20. 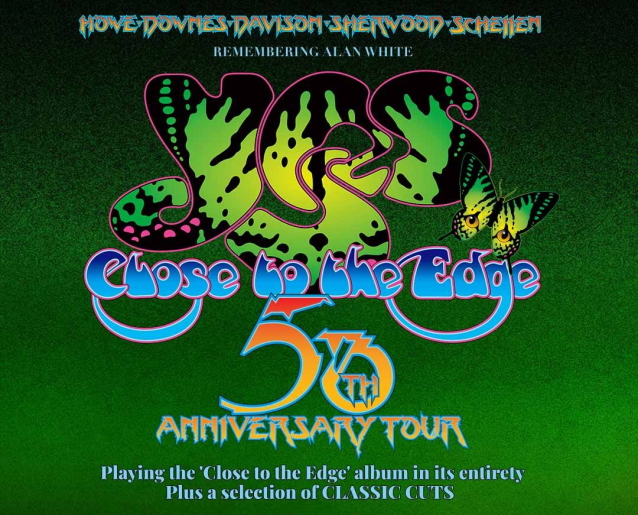