On March 20 at 7:30 p.m. PT, legendary Swedish guitarist Yngwie Malmsteen will take part in a one-night only exclusive livestream event — complete with full, live band — from the entertainment capital of the world, Las Vegas, Nevada.

Tickets can be purchased at yngwie.veeps.com.

Yngwie's latest album, "Blue Lightning", came out in March 2019 via Mascot Label Group. On the disc, Yngwie paid homage to those from the blues world who have fueled his artistic spirit for so long. "Blue Lightning" also included four original tunes that bring to the fore Malmsteen's love for the blues. "I have always featured songs with a blues groove on albums," he said in a press release. "So, having my own material in this vein was very natural for me."

Two years ago, Yngwie denied his reputation as a temperamental egomaniac, saying that he is a "creator" who likes to control every aspect of his art.

March 20th, 7:30PM PT, join The Maestro himself, Yngwie Malmsteen, in a ONE-NIGHT ONLY exclusive, LIVESTREAM event (complete with full, live band) as he performs his legendary songs from the entertainment capital of the world, Las Vegas, NV!
Tickets @: https://t.co/Oj6NfSiZaZpic.twitter.com/j32vJk0mo9 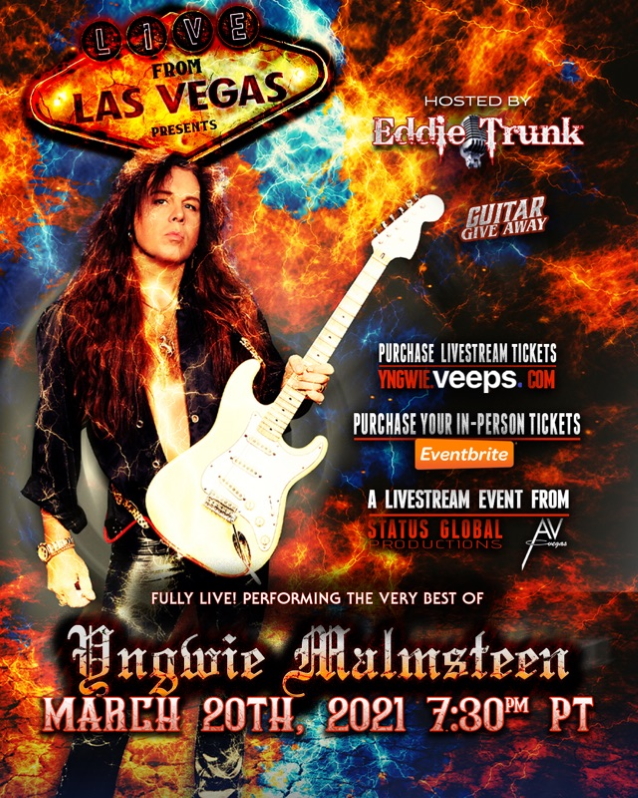