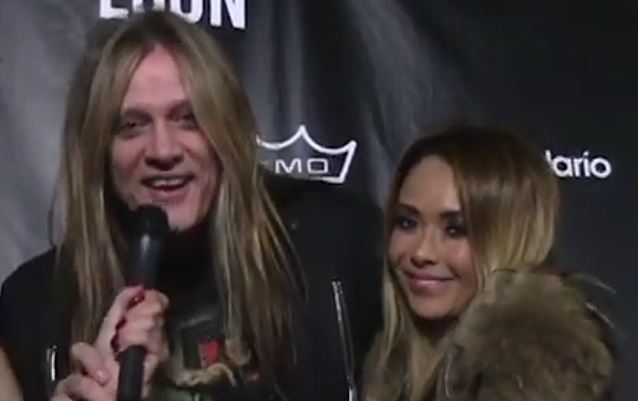 A posting on the Rockbar web site reads as follows: "Rockbar will be hosting the wedding of Sebastian Bach to Suzanne Le and would like to cordially invite you to attend the reception of this exciting event. Sebastian will be bringing friends along from the film and music world. Stay tuned for more details as they unravel."

Limited tickets are on sale now for $300.

Suzanne has since taken to Twitter to respond to criticism over the fact that Bach and his wife-to-be are "charging fans to get into a wedding." She wrote: "We are not charging fans. The venue is. Sorry we don't tell people how to run their business! Know the facts!" She also explained the symbol at the bottom of the wedding advertisement: "The two S's make a heart and the bottom half makes an infinity sign."

Le is model who is reportedly the mother of two children, including one fathered by Brett Harrelson, actor Woody Harrelson's brother.

Asked what kind of wedding he and Le will have, Bach told "In The Vault With Shanda Golden" in April "Probably like a rock and roll wedding. I think we might have even decided on a location. I can't divulge that. But I think we know where we're gonna do it."

Sebastian went on to say that he and Le are "inseparable" and that she makes him "very happy." He then added: "You know what word I think is bullshit? I think the word 'codependent' is a bullshit word. Because I have been called that in relationships. 'You're codependent. We're codependent.' What the fuck does that mean?! Okay, I love you, and I depend on you, and you're mine, and I'm yours, and I always wanna be with you. Yes! Is there something wrong with that? [Laughs] I wanna be codependent with her. And she's, like, 'Me too, dude.' I don't buy that word. I think it's a stupid, bullshit word."

Bach then offered some practical dating advice to couples who are just getting to know each other. He said: "I think that it's a red flag in your relationship if you have a partner whose phone is locked all the time and you're not allowed to fucking look at their phone. I'm just saying, I have [my fiancée's] password, she has my password, and you wanna why? 'Cause there's no fucking reason why not to? And that's the first girl I've ever even met like that. I've never met another girl like that. She's, like, 'I don't give a fuck. Here's my phone.' And I think that if you're in a relationship right now with somebody who won't let you look at their phone — red flag. Okay? I will say that. Because I have a relationship that is fully trusting, fully whole. We're best friends. There's no secrets, because we're totally… I can't tell you what that means to me. And for her too. We both… I'm, like, 'I can't fucking believe that we met each other.'"

Bach proposed to Le on December 28, 2014, which also happened to be Suzanne's 42nd birthday.

Sebastian was previously married for 18 years to Maria Bierk, with whom he had been coupled since before joining his former band. They split up in April 2010.

@Lisa_Neil We are not charging fans. The venue is. Sorry we don't tell people how to run their business! Know the facts! 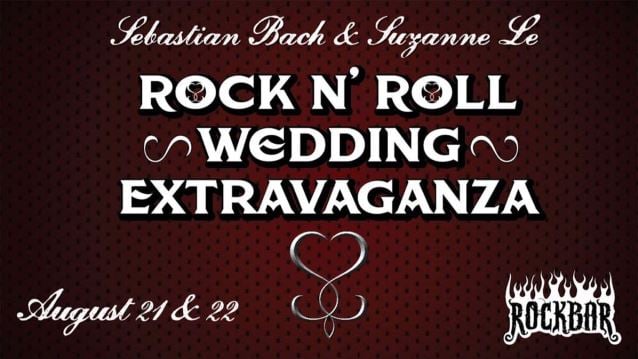 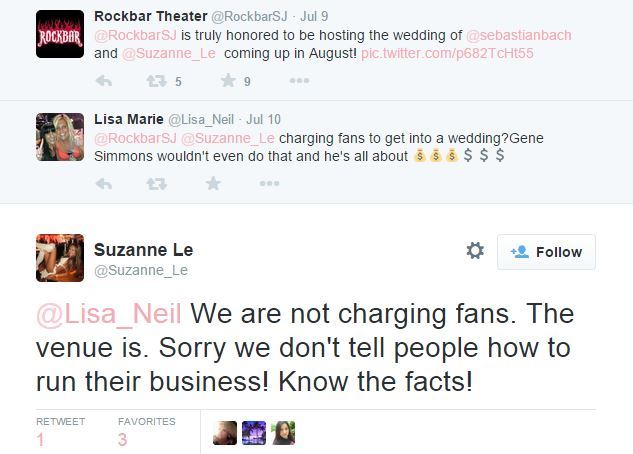