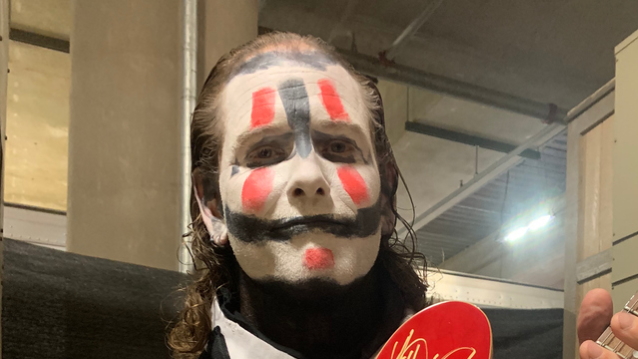 SLIPKNOT and STONE SOUR frontman Corey Taylor has donated the guitar he used to write his entire upcoming solo album to be auctioned to benefit the non-profit organization Innocent Lives Foundation.

Based in the United States but working globally, the ILF is committed to helping children by unmasking anonymous online predators and aiding law enforcement to bring them to justice. Through open-source intelligence gathering, the ILF create dossiers on possible child exploiters by searching the Internet for information and scouring the dark web for proof. Once evidence is found, the ILF turns the dossiers over to the appropriate law enforcement agencies. In 2019, more than 80 of the dossiers produced by the ILF are being used by law enforcement to track, capture, and and apprehend child predators. The ILF is a 501(c)(3) charitable organization and relies solely on donations.

"I'm so proud to be part of the first ever Innocent Lives Foundation Rock and Roll auction," Taylor tweeted earlier today. "ILF is a non-profit working to expose child predators. Bid on my personal guitar I wrote my entire upcoming solo album on, signed by
@slipknot, to benefit ILF: https://soo.nr/YbbM"

The auction was organized by CLUTCH frontman Neil Fallon, who has been on the board of Innocent Lives Foundation since 2017. The auction also includes signed guitars from MY CHEMICAL ROMANCE, NO DOUBT, Zakk Wylde, THURSDAY and CLUTCH. Also up for bids are signed posters from the FOO FIGHTERS and BLACK LABEL SOCIETY. Finally, there is a limited-edition (#21 of 25) black-and-white photo print of Chris Cornell, courtesy of Andrew Stuart and approved by the Cornell estate.

When asked why he wanted to organize an auction for the ILF, Fallon responded: "No one wants to hear, let alone talk, about the topic of child abuse. We can choose to look away, but the victims don't have that option. I realized that if I am in a position to help, how could I not? Putting together this auction is an easy thing to do for kids that need our help so desperately."

Taylor recently revealed that he has 26 songs written for his upcoming solo album. He told WhatCulture about the LP's musical direction: "It's definitely going to be rock-based, but it's going to be rock meets so many different things. There will be harder-edged stuff, but there also will be big, expansive, huge, world-changing guitar songs that you're going to want to sing along to. That's just who I am, and I'm not going to fight who I am."

Taylor has told The Pulse Of Radio in the past that his solo material doesn't work for either SLIPKNOT or STONE SOUR. "I've got a lot of songs that I've written, man, that just a) don't fit in with either band, really, at the end of the day, and b) I know I have this album that I need to make," he said. "I'm the kind of guy that if I can't get that done, then it's gonna hold me back from all this other stuff that I wanted to do."

Taylor and SLIPKNOT are currently on the road behind their sixth album, "We Are Not Your Kind", which arrived in August.

I'm so proud to be part of the first ever Innocent Lives Foundation Rock and Roll auction. ILF is a non-profit working to expose child predators. Bid on my personal guitar I wrote my entire upcoming solo album on, signed by @slipknot, to benefit ILF: https://t.co/yBZk7DMNI4pic.twitter.com/ZtN9LgFG8s