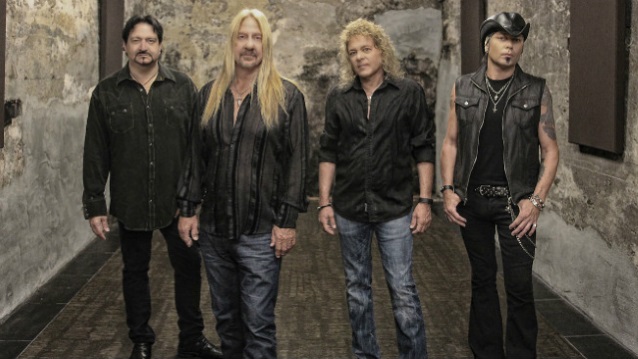 Iconic Bay Area rockers Y&T will play two special acoustic shows later this month. Be among the first to experience the newest Meniketti Wines (being released in July),enjoy an intimate Y&T acoustic set (performing some songs from the new acoustic CD),then hang out with frontman Dave Meniketti and his wife and Y&T manager Jill and the rest of the band afterward — all included in the price of your ticket.

Tickets are available at this location.

Asked in a recent interview with the "Mark & Mitch Show" if Y&T would ever consider doing a stripped-down acoustic tour, Dave Meniketti said: "Probably not. [Laughs] Only because, you know, I think it'd be fun to maybe break it down in the middle of the set and have us do an acoustic thing, maybe a couple of songs. That could be a thing. But, going out and doing a whole tour acoustically, I would feel unfulfilled, let's put it that way, simply because the power and majesty of Y&T is really us plugged in and taking our heads off when we're playing. Not that I can't get into what I'm doing acoustically, but there's no other feeling like that to me."

Regarding the idea to release the recent "Acoustic Classix Vol. 1" EP, Dave said: "Actually, it was Aaron's [Leigh] idea, our bass player. Aaron had come to us because he has his own acoustic duo that he does shows all the time. He just thought, 'You know, we could be doing something really special by doing some acoustic versions of the classic songs.' As soon as he mentioned it, we all agreed, 'Let's give it a go.' One of the things I definitely wanted to do was some things that maybe you wouldn't expect us to do acoustically. That ended up, I think, probably, some of the better… Well, they're all good, they're especially special because they're not a song you'd expect to hear acoustically, but, because of that, you're getting this totally different skew on a song that you know only know too well being electrically played. The other good thing about acoustic is that you really hear the vocals. I think that's a cool thing for all of us. We've really been proud of our vocals and we get to bring that to the forefront."

Y&T's live album, "Live At The Mystic", was released in November 2012 via Frontiers.