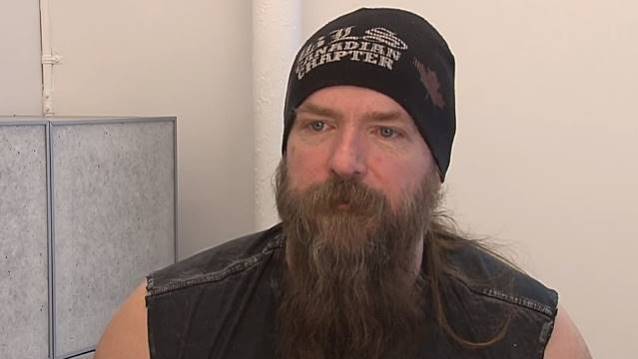 BLACK LABEL SOCIETY mainman and former OZZY OSBOURNE guitarist Zakk Wylde has clarified his recent comments regarding the Ronnie James Dio-era BLACK SABBATH in which he stated that the Dio-fronted version of the band sounded too different from the group's previous output to be rightfully called BLACK SABBATH.

Speaking to Artisan News this past week, Zakk maintained that Dio and BLACK SABBATH mainman/guitarist Tony Iommi made some great music, but it wasn't BLACK SABBATH.

"We were just sitting at a bar back in the day, we were just talking about it," Zakk said (see video below). "It was, like, they [Ozzy and the other members of SABBATH] must have set the 'reset' button of creativity for both of them [after Osbourne was kicked out of the band]. You know what I mean? 'Cause, like, where SABBATH was at that point, between 'Technical Ecstasy' and 'Never Say Die!'…"

He continued: "Like, if we were friends with Tony and sat in a truck and he just said, 'Oh, dude, check out some of the new stuff we've got.' Just his riff writing alone, just musically, I would have been, like, 'Wow. This sounds like nothing I thought you would be… ever even heard you write before.' You know what I mean? Whether it's 'Children Of The Sea', 'Neon Knights'… everything that's on that record… And then Ozzy's stuff sounds nothing like BLACK SABBATH. And to me, I thought… Basically, they [Iommi, Dio and bassist Geezer Butler] areHEAVEN & HELL now. So there you go. That ends that question. What's the name of the band? It's HEAVEN & HELL, right?! Good. It's not BLACK SABBATH, is it? It's HEAVEN & HELL. 'Cause I just said, it sounds like a new band. 'What band is this?" 'Oh, it's a band called HEAVEN & HELL.' 'This is really great. Who's that singer?' 'Ronnie James Dio.' 'Dude, this is awesome.'"

Iommi himself acknowledged in an interview with Artisan News that BLACK SABBATH's songwriting approach had changed once the band had parted ways with Osbourne and hired Ronnie as Ozzy's replacement.

"When we had Ronnie James Dio with us, when we were doing [the] 'Heaven And Hell' [album], that was a distinct difference, writing mode for that," he said. "Because Ronnie is an opposite singer to Ozzy altogether, and it required… Where Ozzy would probably sing on a riff, Ronnie didn't so much; he wanted to sing on chords. So you'd do a riff and then go to a chord and he'd sing. So with us, he'd always sing on riffs, you know? So it was a different way of writing."

After Dio passed away in 2010, Osbourne had this to say about the singer that replaced him in SABBATH: "You know, when anyone dies in this game, it's sad. I first knew about Ronnie Dio's sickness a few months [before he died] and I sent him a message, saying if there's anything we can do to help, please don't hesitate to call us. I wasn't a really big friend of Ronnie Dio. I've met him a few times over the years. But he was a great, great singer. It's a terrible loss. God bless you, Ronnie."