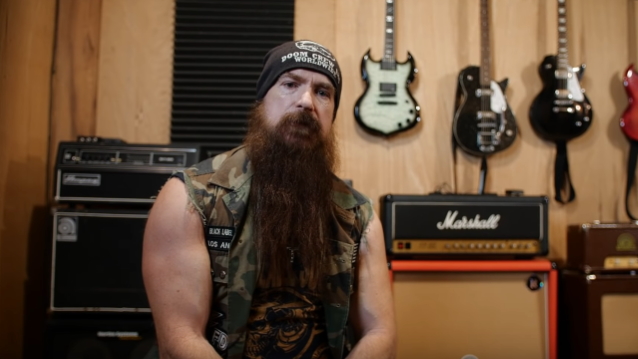 ZAKK WYLDE: 'I Love Being On The Road Every Night'

In a new interview with The Underground Australia, Zakk Wylde (OZZY OSBOURNE, BLACK LABEL SOCIETY) spoke what it has been like to return to the road during the pandemic. He said (as transcribed by BLABBERMOUTH.NET): "We just gone done doing… We did 44 shows in 50 days right before… I guess in October and November. And it was great. Nobody got sick. The shows were great. We went out with our good friends in PRONG and OBITUARY. And we had a great time.

"The schedule is probably about five months from now we're going out to Europe and then come back to America," he continued. "And then hopefully be able to come down and see you guys in Australia and New Zealand, and then go to Asia and Russia — everywhere. Just tour for the next two years or so on the new album. And then we'll see where the Boss is at, with Ozzy, see how he's feeling. If he's ready to fire up the machine again, then we'll go out with the Boss as well. That's what the schedule is right now. So hopefully it'll happen."

Wylde also touched upon how he dealt with being in quarantine during the coronavirus lockdown. He said: "For me… 'Cause people were, like, 'Oh, you're not touring,' and this and that. I'm usually doing two hundred-plus shows or close to 300 shows a year. So for the time that we were home, I cherished every moment I had with my family, the dogs — just, like, walking them every day.

"I told my wife, I said, 'If you've never had a chance to sleep and have insane sex with a professional dog walker, now's your chance.' [Laughs]

"But, yeah, I love being on the road every night," Zakk added. "I thank the good Lord for being able to do what I love and everything like that. So I've never been one that, when I'm on the road, to go, 'Man, I wanna go home. I can't stand it.' I've never done that ever. That's what you put all the practice in; that's what you dream about doing. That's the reason why you have posters of Jimmy Page and all your heroes up on the wall. I still do. That's the reason why you're doing it. But when I'm home, I love being home. So for me, during the lockdown, it gave me more time to just roll with my family."