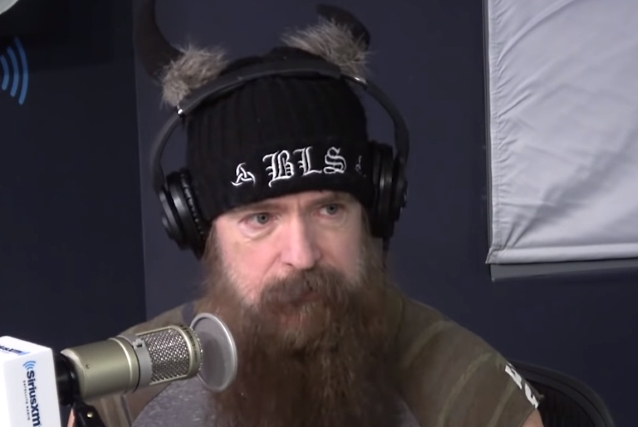 ZAKK WYLDE: I'll Put OZZY's Vocal Performance On First BLACK SABBATH Album Up Against Any Of His Peers

Zakk Wylde says that he would put Ozzy Osbourne's vocal performance on BLACK SABBATH's 1970 self-titled debut up against any other singers within the rock genre. While not considered the most technically proficient of vocalists, Osbourne's distinctive wail and phrasing helped define early heavy metal, subsequently blazing a trail for similar singer — especially within doom metal — to follow.

In a recent interview with television and radio personality Jenny McCarthy (video below),Wylde — Ozzy's on-and-off guitarist since 1987 — was asked whether the 70-year-old Osbourne is capable of remembering the numerous albums he's recorded. "Actually, he does," he said. "You know what? Whenever he talks about all the albums he's done, he always says, whether what album had more success than the other one, he goes, 'I always remember each album whether I had a good time making that record or I was miserable.' I'll say 'Oz, I thought this record was really great.' He goes 'Yeah, I couldn't stand that record just because I was miserable when we were making that record.' Or with the first two [Ozzy solo albums] or SABBATH records, he was, like, 'Dude, that album was so much fun when we made that one. This was going on and that.' Between the drugs, the booze… Oz, when he made the BLACK SABBATH [self-titled debut], his vocal performance on that record, I'll put it up against any of his peers or anybody for that matter, in the rock genre. I said, 'Oz, were you, like, taking vocal lessons with Pavarotti and eating your Wheaties every day?' He goes, 'No. Just lots of drugs, Zakk. Lots of drugs.' I go, 'Let's not forget the booze.' He goes 'Oh, never. Never forget that.'"

Wylde is currently promoting the "reimagined" version of "Sonic Brew", the 1999 debut from his band BLACK LABEL SOCIETY. In conjunction with the new release, BLACK LABEL SOCIETY is headlining the "20 Years Of Sonic Brewtality Tour". The group is playing two shows in each market — the first night features "Sonic Brew" played in its entirety, while the second night sees the Zakk and his bandmates playing a set of greatest hits.

In early April, Ozzy postponed all his 2019 tour dates, both in North America and Europe, as he recovered from an injury sustained while dealing with his recent bout of pneumonia. The singer fell at his Los Angeles home, aggravating years-old injuries from his 2003 ATV accident that required new surgery.