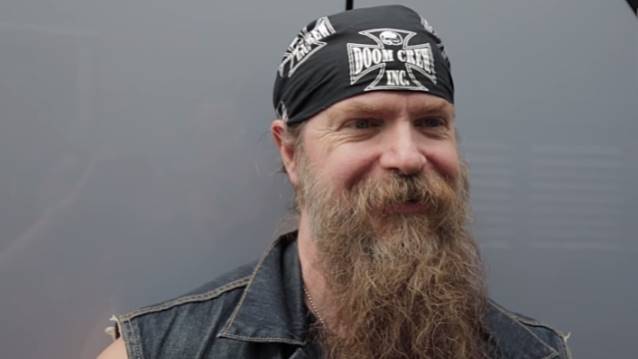 During a brand new interview with The Austin Chronicle, Zakk Wylde (BLACK LABEL SOCIETY, OZZY OSBOURNE) was once again asked about the possibility of a hypothetical PANTERA reunion with him filling in for the late "Dimebag" Darrell Abbott on guitar.

"Me and Phil [Anselmo, former PANTERA and current DOWN singer], we always talked about doing DOWN and BLACK LABEL anyway.

"If you like BLACK SABBATH, chances are you like [LED] ZEPPELIN, and if you go to a DOWN show, there's BLACK LABEL shirts everywhere. Dimebag shirts, Randy Rhoads shirts, Ozzy [Osbourne] shirts, SABBATH shirts, ZEPPELIN shirts. When people aren't wearing the BLACK LABEL colors, those are the shirts they're wearing. So it's just a common bond, and me and Phil always said, yeah, eventually, down the road, we should definitely do something. When we did get the opportunity to [tour together], Phil said, 'Well, Zakk, we'll probably end up doing one of the P songs. Just let me know what tune you want to do.' 'I'm Broken' is a great song, and Dime's shredding in it. We learned it, the band soundchecked it, and I said, 'Phil, right after we get done with 'Stillborn', once you hear the riff, just come out on the white stallions with the harem of chicks and the ice sculptures and strippers and hookers. Just come out on the throne. We were all laughing our balls off, but it was a blast and an honor.

"Whenever anyone asks me about the PANTERA thing, it's like Noel Redding and Mitch Mitchell asking Eric Clapton if he would get together and celebrate Jimi and his greatness. Why would Eric Clapton say no? He's one of Jimi's friends.

"As far as I'm concerned, it's a beautiful thing. You've got Eric Clapton up there, jamming with Mitch and Noel, singing all of Jimi's songs and playing all of Jimi's licks, because this is his buddy and he loves him.

"When ZEPPELIN got back together and they had Jason [Bonham] on the drums, he's not replacing his father. He's celebrating his dad. That's what makes it so moving. You don't have [just some] drummer back there. That's his son."

Former PANTERA and current HELLYEAH drummer Vinnie Paul Abbott recently spoke to Brazil's "Wikimetal" about the persistent talk of a hypothetical PANTERA reunion featuring Wylde on guitar. He said: "The bottom is they call it a reunion, and that means to bring the original members back, and we can't bring Dime back, and he was such a huge part of PANTERA. I don't wanna damage or tarnish the legacy of him or the band. We had 14 amazing years together and it's time for everybody to move on. And I have definitely moved on in my life. I don't live in the past. I like to live for today and what's coming up tomorrow, and I love what we're doing with HELLYEAH. And that's my focus and that's my goal, man."