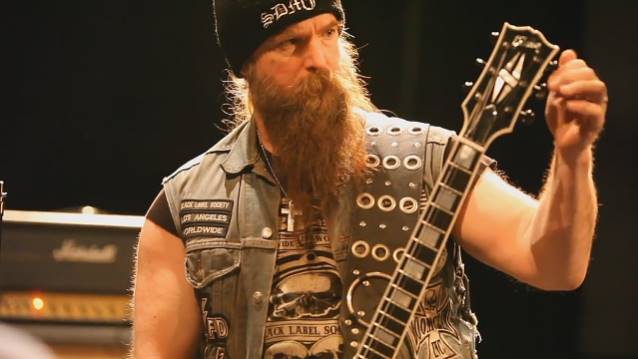 On March 16, Dunlop TV's Bryan Kehoe caught up with the "Experience Hendrix" tour in Milwaukee, Wisconsin. In the clip below, Zakk Wylde (BLACK LABEL SOCIETY, OZZY OSBOURNE) yucks it up a bit and talks about how Jimi Hendrix inspired generations of guitar players.

In a November 2013 interview with Music Radar, Wylde stated about his involvement with the "Experience Hendrix" tour: "I'm totally honored to be part of it, just because of my love for Jimi Hendrix, for one. But then you look at all the insane guitar players who are on the tour — you know it's gonna be awesome. I'm a huge fan of everybody involved."

He continued: "My guitar teacher, LeRoy Wright, was a huge Hendrix guy, so he turned me on to Jimi. As a kid, I was coming more from BLACK SABBATH and stuff like that — that's what I was into at first. I dug Hendrix, and I totally got that he's the messiah; he's the Jesus Christ of the electric guitar. One of the first tunes LeRoy showed me was 'Hey Joe', and that was C, G, D, A and then E major. Eventually, he taught me the little lick in the beginning, which I couldn't get at first. I was happy right off with playing the chords. [Laughs]

"Through Hendrix, I discovered guys like Robin Trower and Frank Marino. It's interesting, though: I'll hear Stevie Ray Vaughan play the blues, or when I go and listen to Hendrix... It's blues licks, but the way they twist them and bend them and interpret them changes everything. It's like they're making a new recipe from this thing called the blues. If you were cooking chicken, depending on which spices and sauces you used, you'd be like, 'Wow, that tastes like Frank Marino,' or 'That takes like Robin Trower, and that takes like Stevie Ray Vaughan.'

"Jimi didn't start the whole thing — he got it from Buddy Miles and BB King and all the blues guys that he dug — but he put his own spin on it. A pretty serious spin. [Laughs] It's amazing how you can tell these guys apart, though. You can't tell everybody apart, but the guys I mentioned, and especially Hendrix, of course, you can pick them out from everybody else. Hendrix you can pick out from a mile away. His sound, his execution — he was about as unique as it gets."