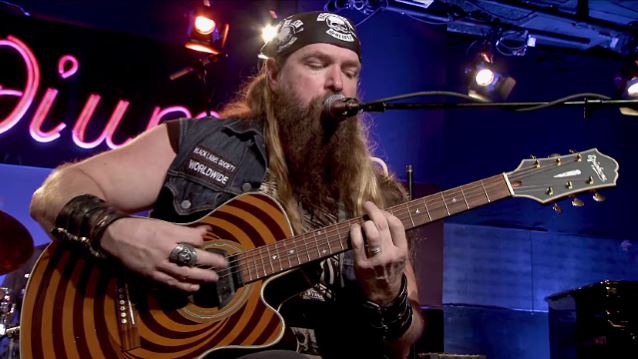 Barbaranne Wylde, the wife of BLACK LABEL SOCIETY leader and former OZZY OSBOURNE axeman Zakk Wylde, who also helps run Zakk's career as his as his co-manager, has revealed to Examiner.com that the guitarist/vocalist will enter the studio after his "Unblackened" spring 2015 tour to record "Book Of Shadows Volume II" for an early 2016 release. The effort, which will be made available on the 20th anniversary of the arrival of the original "Book Of Shadows" album, will be followed by a world tour to support "that side of Zakk's music," according to Barbaranne.

In an interview with Rough Edge, Zakk stated about the creation of the original "Book Of Shadows" album: "The thing is that I had all these tunes from [OZZY OSBOURNE's] 'Ozmosis' record, you know. Aside from writing all the fuckin' heavy shit because at the time we were doing 'My Jekyll Doesn't Hide' and the 'Perry Mason' stuff. And then 'Thunder Underground', just like fuckin' pure riff fuckin' music. So, aside from doing that, I always had acoustic around because it's just great for your chops. You know, you sit down and jam on an acoustic when you pick up an fuckin' electric guitar it's like fuckin' lightning."

He continued: "So I'd be jammin' on an acoustic all the time and I'd have all these ... I'd just be dickin' around writing songs all the time. So whether I'm writing riffs all the time or I'm writing regular flat-out songs, I just had all these tunes and I was like, man, it's like fuckin' beer-drinking music at the end of the night, you know? I had all these tunes lying around and that's when Geffen… they asked me to do another album. I tried to get out of it, because I owed them, like, three records when I signed with them, so we did the PRIDE & GLORY thing and then [A&R guru John] Kalodner left and went to Sony and it was just like fuckin'… I didn't know what the fuck was going on. Let's put it this way: They wanted me there about as much the Pope wanted to have lunch with fuckin' Anton LaVey, man. Which was basically not gonna ever fuckin' happen. The whole thing was, like, 'We gotta get outta here, man.' So we did the 'Book Of Shadows' thing."

Zakk added: "I tried to get off the label but it was more cost effective for them to have me go in an do another fuckin' record, so we ended up doing the record and after that, Ozzy called and said, 'Dude, you wanna do this 'Ozmosis' record?' so I was jammin' with... Actually, I got it backwards here. Fuckin' 'Book Of Shadows' was after the 'Ozmosis' record. In between jammin', we'd go back to trackin' the stuff and I'd go back to this bar that was right next to the hotel and I'd be in there until, like, six in the morning drinking with everybody. They'd be, like, 'Dude, go get your fiddle and play us a fuckin' tune.' So I'd be jammin' for 'em — I'd be playing all this new shit for 'em. You know, that's pretty much how that record came about."