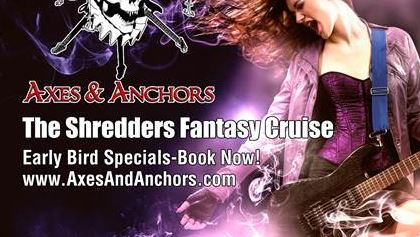 In an age where heavy metal music cruises with high-profile lineups are becoming a dime a dozen, it's about time that true guitar pros, gearheads, theorists and hobbyists have a voyage of their own. Imagine a cruise exclusively planned for guitarists and instrumentalists, featuring performances and personal lessons from some of the greatest guitar gods on the planet.

Wake up — you are not dreaming! Prepare to learn from the masters on what fans have dubbed the "shredders cruise": the five-day/four-night Axes & Anchors cruise aboard the Carnival Victory, departing from Miami, Florida on February 20, stopping in Key West, Florida and Nassau, Bahamas, and docking back in Miami on February 24.

Passengers can look forward to more than 40 performances, about a dozen free guitar workshops, as well as games and mingling with guitar gods, and more. In addition, the cruise plans on featuring gear demos and displays from some of today's premier guitar and gear manufacturers.

World-renowned guitarist and Axes & Anchors performer Alex Skolnick states: "For generations now, the guitar has remained a source of creativity and symbol of coolness, defying strange musical trends, poor economic forecasts and more, all the while providing a sonic backdrop to good times and bad. I consider it a great honor to be joining Yngwie, Zakk and many other great players as part of Axes & Anchors, the very first cruise built around the guitar."

Tickets for the cruise start at the competitive rate of just $899 per person (based on double occupancy),and include all accommodations, meals, concerts, open workshops, games, photo ops and more. Since the ship holds a limited number of passengers, early booking is highly encouraged. Sail less expensively and get more heavy metal bang for your buck on the Axes & Anchors cruise! Tickets are on sale now at www.AxesAndAnchors.com, and monthly payment plans are available.

"This cruise will surely appeal to guitar players who want to take their skills to the next level in this really fun, unique, and immersive setting," said Ann Squire, co-owner of Axes & Anchors. "Passengers will get to meet their idols and learn from them in between stops at exotic beaches and on-board parties. All of the performers are bringing full bands, and we will be adding some iconic bands to our lineup as well, but as our name implies, the focus now is on guitar-dominated rock."

Squire is also thrilled to have fans experience the unique "pool stage" featured on the Axes & Anchors cruise. "The pool stage is unique because it was designed as a pool "theatre". Most stages built on a pool deck are the typical raised stage and then a large flat area in front for standing or sitting that goes back but on the same level. This stage is raised with a flat area in front but has tiered levels as it goes back. The different tiers allow for much better viewing for those not as close to the front of the stage. You don't have to be concerned about the guy in front who is 7 feet tall when you're only 5'3"." 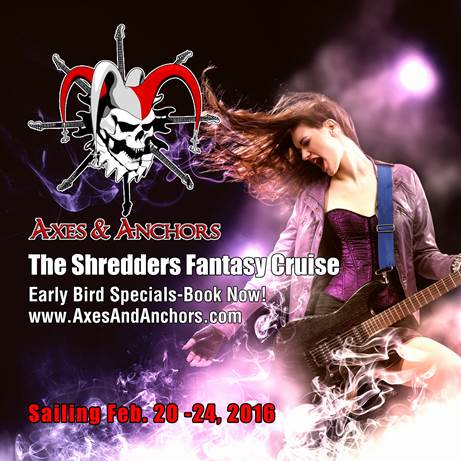