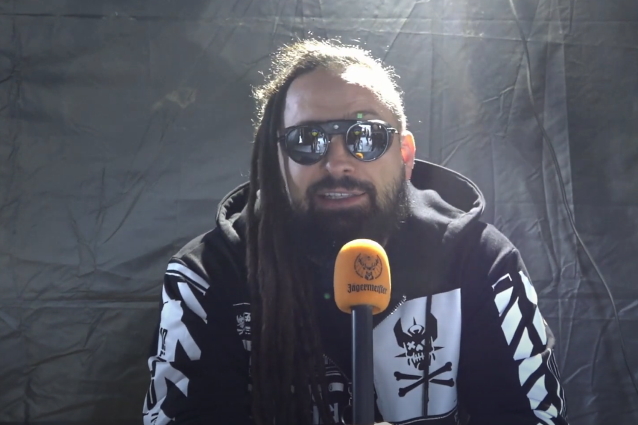 FIVE FINGER DEATH PUNCH guitarist Zoltan Bathory was asked in an interview with Finland's Chaoszine if the band's songwriting process for the upcoming ninth album, "AfterLife", was any different to how it was in the past now that FFDP has a new guitarist, British musician Andy James, who joined FIVE FINGER DEATH PUNCH in 2020 as the replacement for the group's longtime guitarist Jason Hook. He responded (as transcribed by BLABBERMOUTH.NET): "For us, the process… We have a method that works for us. Every band works differently. For us, it comes from a certain philosophy, how I look at music. And the philosophy I look at music with is that if you look at classical composers, for example, these songwriters, these composers were creating music and delivering complex messages with their music alone. You have Vivaldi, for example, The Four Seasons. You know which season is what. How do you know? The music somehow tells you that. So these classical composers could deliver pretty complex pictures and messages and paint an environment for you with the music alone. And I believe that that's the right way to go. So we always write the music first. And the music itself has to sort of say something, it has to paint the picture. And then we give it to Ivan [Moody, vocals] to write the lyrics. And I think that's when something, it really comes together. Because when the music already says something and the vocals kind of enhance that, then you have something special. And that's been always the process and we always do it that way. This record was done the same way — music first, and then we take it to Ivan."

James was previously featured on "Broken World", a song that was included on the second installment of FIVE FINGER DEATH PUNCH's greatest-hits collection, "A Decade Of Destruction – Volume 2", which came out in the fall of 2020.

"AfterLife" is due on August 19. The title track, which was released as a single in April, recently gave FIVE FINGER DEATH PUNCH the most consecutive No. 1s on Billboard's Mainstream Rock Airplay chart. The song was the band's 13th total No. 1 and eighth entry on the chart in a row. FIVE FINGER DEATH PUNCH broke out of a tie with DISTURBED and SHINEDOWN, each of whom has seven consecutive No. 1s on the chart.