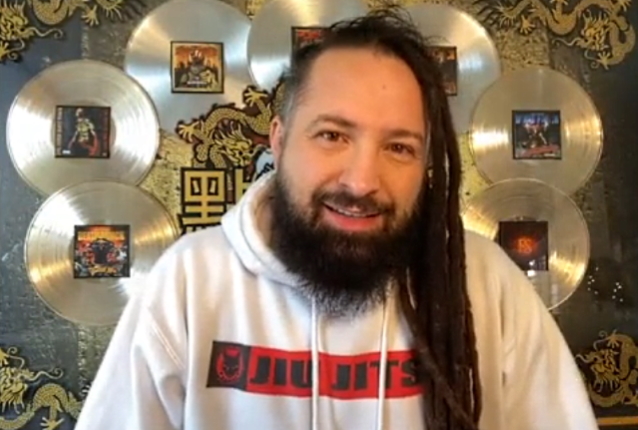 ZOLTAN BATHORY On FIVE FINGER DEATH PUNCH's Work Ethic: 'This Is Not The Time To Step Off The Gas Pedal'

FIVE FINGER DEATH PUNCH guitarist Zoltan Bathory recently spoke to Pablo of the Minneapolis, Minnesota radio station 93X about the band's 2009 album "War Is The Answer". Watch the one-hour chat below to hear more about the "blood, sweat and ass-kicking" it took to complete the LP, some of the crazy stories along the way, and what success means to the group.

On the topic of FIVE FINGER DEATH PUNCH's work ethic, which has propelled him and his bandmates from undercard hopefuls to arena-filling headliners, Zoltan said: "I love what I'm doing. That's the secret of life — if you do what you love doing. I can speak for all of us — this is what we wanted to do our whole lives, and now that it's here, this is not the time to step off the gas pedal. So, yeah, we didn't wanna take time off, and this situation right now, this COVID thing, is the first time in 15 years that I am actually home… And Andy James is here, our new guitarist, so we're jamming around and writing music. So that's another thing — if we can't tour, we'll just make another record, maybe even a double one. Why not?"

The second instalment of FIVE FINGER DEATH PUNCH's greatest-hits collection, "A Decade Of Destruction - Volume 2", came out in October.

"A Decade Of Destruction - Volume 2" contains four previously unreleased tracks: "Broken World", a Steve Aoki remix of "Bad Company", a Joe Hahn remix of "Wash It All Away", a Felmax remix of "Trouble" and a new acoustic version of "Wrong Side Of Heaven".

In October, FIVE FINGER DEATH PUNCH confirmed that it officially parted ways with guitarist Jason Hook back in February 2020, during the band's sold-out European arena tour. He has since been replaced by the aforementioned renowned British virtuoso Andy James, who is also featured on "Broken World".

"F8" was once again helmed by Kevin Churko, the Canadian record producer/engineer and songwriter who currently lives in Las Vegas, where he works out of his private studio, The Hideout Recording Studio. The drums on the LP were laid down by Charlie "The Engine" Engen, who made his live debut with the group during its fall 2018 tour with BREAKING BENJAMIN. The follow-up to 2018's "And Justice For None" capped a turbulent period for FIVE FINGER DEATH PUNCH in which singer Ivan Moody finally got sober after a near-fatal struggle with addiction, while co-founding drummer Jeremy Spencer bowed out of the band due to physical issues.