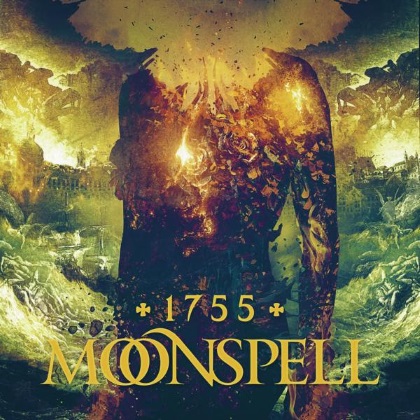 MOONSPELL has never been the kind of band that writes the same album over and over again. The overarching label "gothic metal" is an adequate descriptor, yet Portugal's leading metal band clearly does its best to differentiate its material from that which came before. This mindset bleeds through to album number 12: "1755". Although the band has boasted nothing short of rock star status in its homeland for a couple of decades, never before have the lyrics for an entire MOONSPELL album been sung in Portuguese exclusively; apropos considering that the conceptual focal point is the massive earthquake, estimated in the magnitude range of 8.5-9, that ravaged the group's home of Lisbon a few hundred years ago. An event that obviously tested the Portuguese people's strength.

With "1755", MOONSPELL has taken a decidedly darker turn compared to the much more accessible stylings of previous album "Extinct". There's a much more cinematic quality this time around, most notably with the layering of choral arrangements and bold orchestration, all of which are captured magnificently by TUE MADSEN's characteristically crystalline production. The songs are epic but brief and to the point without forsaking a sense of building momentum, evident on a track like "Todos Os Santos", a number that that barely exceeds the five-minute mark.

Elsewhere, a blend of Mediterranean and Middle Eastern melodies flow through "Ruinas", while "Desastre" crawls forward with a lurching pace that highlights Fernando Ribeiro's aggressive, commanding vocals. When it works, it's nothing short of inspiring; however, his rough vocal approach is far too aggressive in relation to the majority of "1755"'s corresponding music, especially on "1 de Novembro" where he shouts along to a mellifluous display of smooth, up-tempo Euro metal. Beyond that, MOONSPELL is in fine form. Traditional metal licks embellish the gothic core of "In Tremor Dei" as Fernando narrates the track like a malevolent and maniacal historian. He's later joined by Portuguese vocal star Paulo Bragança who adds an impassioned, melancholy soaked base that helps anchor Fernando's performance and timbre to the comparatively calmer music.

There's so much going on within "1755" from the strings and bongos to the Oriental singing and cinematic soundscapes that the individual parts can be overlooked. Throughout the orchestration, pomp and drama, guitarists Ricardo Amorim and Pedro Paixão provide the driving source around which the rest of the components flourish with a hint of triumphant optimism shining through the release's morose essence and conceptual tragedy. MOONSPELL has thoughtfully and successfully conveyed the tough spirit of the Portuguese people who didn't allow the magnitude of that centuries old natural disaster to knock them out. And in terms of the band's career, MOONSPELL itself shares the resilience of the people celebrated on "1755".