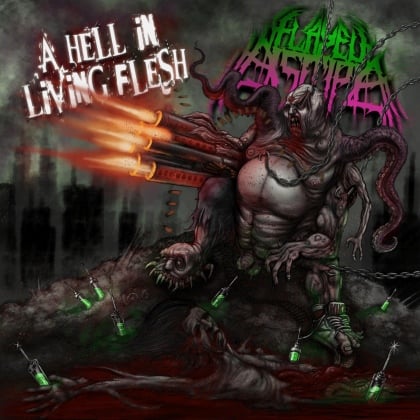 A Hell In Living Flesh

Blending thrash and death metal has always been a good idea, but currently there seems to be a small upsurge in examples of the form going on. Hooray for that. Returning after a reasonably lengthy hiatus, FLAYED DISCIPLE were always dedicated to a monstrous blurring of subgenre boundaries, and now they sound more militant about the whole thing than ever. "A Hell In Living Flesh" is absolutely fucking vicious, and casually outstrips the band's 2012 "Death Hammer" debut by virtue of being at least eight times more intense.

As formulas go, FLAYED DISCIPLE's is not a particularly complex one. "I Am Leviathan" sets the band's stall out as aggressively as possible: this is thrash metal by design, but death metal in delivery, and seldom has that combination been spewed out with more vitriol or force. "Warmaster" reinforces the point, via a blend of savage, EXODUS-style riffing and pitiless, tech-death execution. Vocalist Merv Hembrough never sounds less than livid, but his rasping bark has gained power over the years, and you can almost hear his bloody phlegm hitting the microphone.

FLAYED DISCIPLE are more than just death/thrash revisionists. "Arch Contaminator (1985)" is a seven-minute colossus with a lively imagination and an obscene number of great riffs. It begins at full, white-knuckle pelt, and builds toward a brutal and ornate climax, wherein black grandeur and bewildering technicality collide. Equally stunning, but about half the length, is "Flayed Disciple" itself. All the greatest bands should have a theme song, and this one is a razor-sharp and snappy thrash bombing raid that sums up FLAYED DISCIPLE's sheer ferocity in three-and-a-half minutes. Meanwhile, "The Dark Other" is a dark and wayward death / thrash odyssey, which snaps from ominous, gothic intro to a genuinely hair-raising barrage of riffs and steadily increasing tempos. The song's final, multi-riff descent into madness sounds a little like DECAPITATED jamming with DARK ANGEL, and that is obviously a compliment of sorts. In fact, much like DARK ANGEL, FLAYED DISCIPLE are instantly and enduringly gripping because they simply seem to hit harder than anyone else ploughing the same furrow. In the best possible way, every one of these 28 minutes feels like a threat.