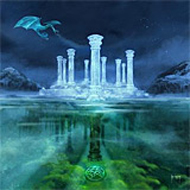 01. Between The Absu Of Eridu & Erech
02. Night Fire Canonization
03. Amy
04. Nunbarshegunu
05. 13 Globes
06. …Of The Dead Who Never Rest In Their Tombs Are The Attendance Of Familiar Spirits…
07. Magic(k) Square Cipher
08. In The Name Of Auebothiabathabaithobeuee
09. Girra's Temple
10. Those Of The Void Will Re-Enter
11. Sceptre Command
12. Ye Uttuku Spells
13. Twix Yesterday, The Day & The Morrow

Had ABSU drummer/vocalist/lyricist/driving-force Sir Proscriptor McGovern tried to pick up where the earlier incarnation of the band left off with 2001's "Tara", this self-titled resurrection would more than likely been one of the biggest letdowns of the year. Without the blackened thrash riffery of guitarist Shaftiel, which helped make "Tara" such a relentlessly punishing endeavor, any attempt by McGovern to carbon copy said disc would be futile at best. Fortunately, the drummer did the only truly logical thing and pushed his treasured piece of black metal Americana into even darker and more expansive territories.

On this self-titled reemergence onto the scene, ABSU '09 has taken the band's previous brand of black metal and made it even more progressive before and done so without losing an ounce of the primal and blackened sonic slaughter that has been there since "Barathrum: V.I.T.R.I.O.L.""Absu" offers plenty of straight-forward blackened hellfire via "Night Fire Canonization" and "Scepter Command". New(ish) guitarists Zawicizuz and Aethyris MacKay add enough melody and variety to the mix to keep these songs well above the status of "average." The element of thrash is more prevalent during moments of "Girra's Temple" and "Amy", yet none of these show the willingness of ABSU to push the limits like the epically entitled "…Of The Dead Who Never Rest In Their Tombs Are The Attendance Of Familiar Spirits…" This three-part journey travels through realms of traditional black metal, folkish prog and genre-bending fusion before fading into a creepy demise. Perhaps that it probably took more focus to pronounce correctly than it did to write, ABSU comes up a bit short on "In The Name Of Auebothiabathabaithobeuee", but this is easily forgiven with the diversified and progressive slaughter of "Magic(k) Square Cipher".

While ABSU hasn't quite re-invented black metal, or themselves with this album, they've definitely made it clear that they intend to continue to carve their out own niche in the genre; which, more often than not, works quite well for the band. Though it can tend to lean a bit toward the formulaic side at times, this is a damned brutal example of what can happen when unconventional thoughts collide with traditional American black metal.