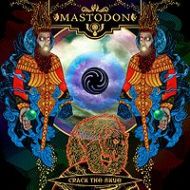 Any album that comes with its own built-in hype machine or slapped with the "next-big-thing" tag before proving its worth to the public should be met with a certain amount of caution and even skepticism. That goes doubly for metal bands that break through the underground and find themselves a part of the major label machine. After all, how many times have we been burned when our favorite soldiers take desk jobs, so to speak? I'm not going to wax philosophical about good bands selling out to the almighty dollar, or losing their passion through the smoke and mirrors of the "lifestyle," but I will tell you that I was among the many who wondered how far from square one MASTODON was going to go since met with unexpected (albeit deserved) success. The answer to that question is simple: MASTODON is going to go wherever the fuck they want to go and that's exactly what they've done with "Crack The Skye".

Musically, conceptually and visually speaking, this is among the best that 2009 has yet to offer. Far be it from anyone to accuse the LSD-addled minds that crafted this record to take a calculated and logical step forward from their last opus, "Blood Mountain"; yet that is exactly what "Crack The Skye" is in many ways. Instantly identifiable as MASTODON, the steps the band has taken to avoid self-plagiarism are also just as evident. On one hand, the music on this disc is a much more progressive and boundary pushing affair, but it's also a much more accessible one at the same time. Almost as if, through penning the tale of a paraplegic young man that discovered how to astral project himself through time and space, the quartet managed to find that small slice of a parallel universe where different truly does equate to good. Aside from the organically honest "classic rock" vibe that breathes from the tunes and the stepping stones that were previous MASTODON albums, there's really nothing outside of individual moments and nuances that this album can be compared to.

Best taken in as a whole, "Crack The Skye" is a fluid journey through varying degrees of beauty and repulsion, confusion and serenity and many other of life's many paradoxes that can metaphorically translated via a musician's tools. Approached individually, these tunes are still solid listens. From the exotic wandering that jumps sporadically into twisted and hurried grooves, hypnotic choruses and soulful solos on "Oblivion" to the snarling, proggish slam of "Divinations" and dueling elements of catchy and trippy that "Quintessence" delivers; the opening trio of songs could all stand proudly on their own merits. The album's first of two epics, "The Czar: (I)Usurper (II)Escape (III) Martyr (IV) Spiral" is a prime example of focused psychedelica. Captivating vocals drawl out over the top of intertwining melodies and ambience. As the songs goes through its four phases, the intensity of both the mood and music increases before reaching an hauntingly infectious plateau. An album highlight comes during the Jimmy Page-esque solo during this song's final moments. A culmination of everything MASTODON is and has been, the thirteen-minute, "The Last Baron" is by far the band's most awe-inspiring combination of eeriness, melody, prog-minded musicianship and riff innovation.

Typically, albums of this nature take the risk of coming off as too pretentious, or just completely go over the heads of most of its listeners. After all, it's fuckin' rock n' roll! Nobody should need a road map or cliff notes to listen to a CD. Fortunately, with MASTODON's song-oriented approach to writing these tunes, coupled with the bulldozer they drove through the walls of expectation, nothing but a tuned-in set of ears is needed to feel the effects of "Crack The Skye". The hype has been lived up to.