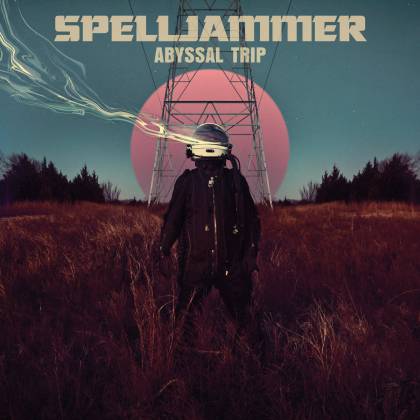 Rising to the top of the modern pantheon of doom, sludge and stoner rock with the ease of champions, SPELLJAMMER are plainly not fucking around. "Abyssal Trip" makes no attempt to subvert a classic formula: within these blitzed-out jams' treacly, floor-splitting levels of heaviness, the sound of pure SABBATH-ian magma ebbing and flowing can be clearly heard, and fans of SLEEP, CONAN and BONGRIPPER will already have plunged in without hesitation.

Nonetheless, it's worth stating exactly how brilliant SPELLJAMMER are at this particular strain of bruising but wildly psychedelic, slow-motion doom. With a gift for generating the kind of hideous bottom end that routinely sets ELECTRIC WIZARD apart from their peers, this Swedish trio sound simultaneously brutal and otherworldly; analogue ghouls, battling with the elements and an ever-shifting reality. Plus, of course, this is the perfect soundtrack for smoking ill-advised quantities of weed and tapping into whichever cosmic mainframe pops up in your febrile imagination. All bases covered, if you will.

In truth, there is really only so much that one can say about an album that worships The Riff and demonstrates that love from within a swirling vortex of acid rock atmospherics. Opener "Bellwether" is a startling entry point and hurls down the stoner sludge gauntlet with haughty glee. You may find yourself uttering ungrammatical phrases like, "The fucking riffs on this thing!" or simply reaching for the bong, but either way there's no missing the fact that SPELLJAMMER have absolutely nailed the tricky balance between all-out sonic war and psychedelic verité. With vocals that hover somewhere in the sonic mid-ground, as disembodied mantras floating aboard an unstoppable river of riffs, songs like "Lake" and the murderous, ten-minute meanderings of the title track are gently but deliciously unhinged, the mischief of psychedelia coursing through doom's viscous depths.

And just like any trip worth the potential psychological aftermath, "Abyssal Trip" sustains its intensity until the end. "Silent Rift" is the most jaw-dropping piece of music SPELLJAMMER have produced to date, with an off-kilter climactic riff, nominally in 11/8 time, that is as hypnotic and undeniable as it gets. As the song slithers and smashes through its ten, immersive minutes, it sounds wholly in thrall to TONY IOMMI's extraordinary blueprint, while instinctively wringing fresh and ever-so-slightly twisted magic from it. Or, to put it more simply: the fucking riffs on this thing!